Mimouni El Houssaine, Taroudant, Morocco born in 1957, lives and teaches fine art in Montpellier although he travels constantly between the two Mediterranean shores. These constant coming and goings are reflected on his canvases in a game of symbols, spattered written texts and horizons in perspective. Mimouni's work finely weaves the intricate dialect of yearning for other shores, spurned on by the desire to leave, to return or simply of dreaming of being in a different place. « Yearning for the other shore, is a translation of my thoughts of returning to my country, going back to my roots. It also symbolizes a return to the light, so very unique to Africa», the artist states.

Due to a seemingly limitless creative energy and much hard work, the artist seems to have reached his maturity. One feels the proffered space is precise and refined. Gestures take on density. The rhythm remains musical but the movement of the brush is a dance in which the body acquires an absolute mastery. Among words and signs whether painted on canvas or on paper, the many crossings are represented by means of recurring symbols such as canoes, bundles of sticks or ladders reaching for the sky.

Among tones of grey and blue, red and orange and ocre, a boat sails the width of the canvas in an animated backdrop of letters, messages and signs. The ladders rise while courses are plotted, sometimes bound for the North, sometimes for the South or sometimes simply heading towards the horizon. These bare ladders, ubiquitous on Mimouni's canvases, exist to go back in time, to climb onto the train of dreams; they are a nexus with another place, banishing frontiers and barbed-wire fences. They are suspended between the earth and the sky. « The idea is one of elevation, a search elsewhere, a climb to infinity» explains the artist.

Painting, collage, materials and text are combined in a score etched in the heart of one for whom the quest for the invisible seems more irrepressible than ever. Each curve is a meditation, the slightest trace a search towards an elevated state of mind susceptible of reaching the sky. And, as if it were indication of a divine benevolent presence, a very subtle light illuminates the space.

Taking inspiration from his travels, but also from music, Tuareg sounds, Flamenco and Sufi music, Mimouni's work suggests a call from afar. Timeless landscapes open to imagination, peppered with symbols and vocables in the frontier between drawing and speech: places where no human figure intervenes, but where the features of humanity are delicately outlined in every detail. It's as if the artist, who had dreamt of being an archeologist, wished to hint at "the hereafter" in his work, revealing the most minimal trace of memory or frame of mind. 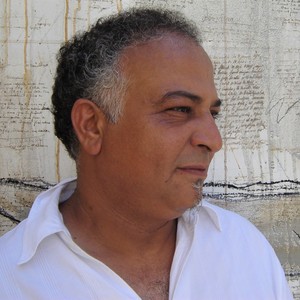