Turkish-Austrian artist, Pinar du Pre, was born in 1972. She has been influenced by the art of Künstlerhaus and Wiener Werkstaette. As a talented autodidact, Pınar started painting early on, and by the age of 13 she had finished her first oil painting. Between 1995 and 2005, she produced a series of cubist-inspired oil on panel paintings, capturing street scenes of Istanbul. In 2006, she developed what is now her current style, in which she weaves digital art with ‘the real world,’ a technique she has coined media fusion. Her work explores the territory between the exterior, physical world and the interior world, the soul.  Pinar’s paintings highlight the idea that perception of physical reality is deceptive and ultimately teeming with layers. Her technique combines the fusion of materials, outlooks and diverse inspirations to construct the synthetic intensity of digital art. Her figurative style depicts a familiar yet distorted daily life. Her works combine our virtual perception, represented by new media and digital arts, together with the tangible reality of our daily lives, represented by ‘old media’ and both materials and techniques such as acrylic, gilding and epoxy glass. Paying tribute to her main influences, Pinar describes her style as "Jugendstil Pop-Art." But where Pop was stimulated by the iconography of materialism and the mass culture of its time, her vision is more intimate in its subversive intent. Her aim is to liberate perception by looking into and beyond the canvas. Each painting depicts its own narrative, designed to stimulate the audience into bridging the distance between the visible and invisible, reality and consciousness. 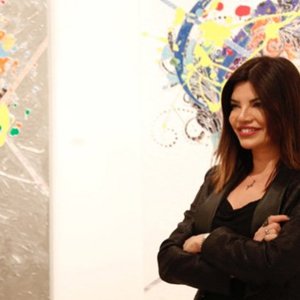