She was born in Esme (Usak-Turkey) in 1978. She was graduated from SDU Burdur Educational Faculty, Department of Fine Art Education in 1998. She began to work as an art teacher in 1998. In 2002 she completed her PhD Program in DEU that had started in 1999 with a thesis named “Galleries and Art Education”. She had started her doctorate in 2002 and completed in 2008 and got the title of “Doctor” with her thesis named “The Effect of the Method of Drama Education on the Professional Manner and Successes of the Art Education Students”. She lectured in DEU Buca Educational Faculty, Department of Fine Art Education in 2003-2004 Fall Term and 2004-2005 Summer Term. In 2006 she was sent to a workshop called “The European Dimension Through Art, Culture And Gastronomy Along The Way of Saint James” as educational manager. She is the member of a group called “ARBEDE” consisting of 7 academicians, and AIAP (UPSD). She began to work as Assistant Professor in Adnan Menderes University Educational Faculty, Department of Fine Art Education. She got a lot of several national and international exhibitions, competitions, symposium and efficiency. 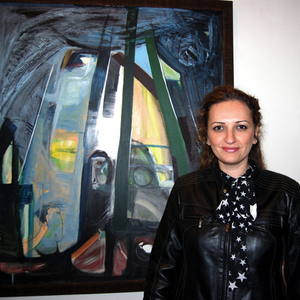