Born in 1989 in Douala (Cameroon) where he lives and works. In 2010, he obtained his A-Level in painting at the Institute of Artistic Training of Mbalmayo (IAT/IFA). Subsequently, he joined the Institute of Fine Arts Foumban, where he obtained a degree in drawing/painting. In 2017 he joined the Post Master "Moving Frontiers" organized by the National School of Arts of Paris-Cergy (France) on the theme of borders. Beforehand, he flirts with the workshops of the elder artists like Ruth BELINGA, Jean Jacques KANTÉ, Pascal KENFACK, Salifou LINDOU and Hervé YOUMBI. Throughout his training in the fine arts of Foumban, he is the laureate of several artistic distinctions (Notably best sculptor, installer and painter).

He is concerned by the impact of violence, indifference and the passivity of the international community and governments on the situation of victims in the world. Nkot uses the body and the territory as key subjects around which he structures his plastic approach. The use of maps interrogates and brings awareness to the issue of boundaries whilst simultaneously providing a backdrop that shows the seeming insignificance of the individual in such an abstract and depersonalized representation of reality. His intention is to free these "victims of anonymity", marked by the indifference that characterizes the complicit silence of the world. The use of cartography in his work questions the way the body intertwines with space and above all, the place of the human in society. 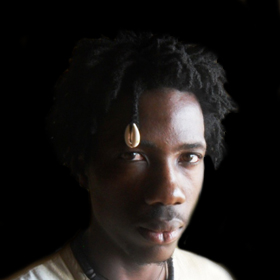