Fadi Daoud was born in Fuheis, Jordan in 1984. He studied Fine Arts at The University of Jordan, in Amman, and then pursued his Master’s degree on Islamic Art at the Al Balqa University in 2011. Influenced by Hussein Bakeer, George Bahjouri and Fargali Abdul Latif, Daoud’s body of work is linear in style. He is also inspired by the Byzantine and Sufism periods. Daoud’s body of work has been described by art critic Ica Wahbeh, as “Parallel lines flow seamlessly, seem to run to infinity, as they should, but then, defying laws of physics, bend ever so slightly, to create curves and domes, rounded lips emitting sounds or decorating curlicues. They generate endearing people and tableaux, life and movement, sound and smell. Derived from the spirituality of Islamic art, the geometrical sharpness of lines meeting at acute angles is softened by the music Daoud listens to whilst working. Iconic regional singers, Umm Kalthoum, Asmahan, Fairouz , back-up artists and instrument-plucking musicians populate his paintings…” 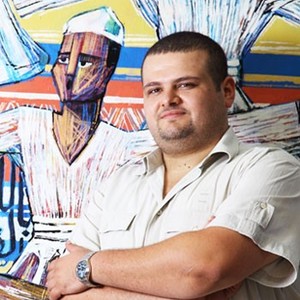