A Franco-Lebanese painter and draughtsman, David Daoud was born in Lebanon in 1970. Having left Beirut in 1978, his artistic output remains deeply marked by the experience of exile. A contemporary expressionist, David Daoud’s paintings tell the fate of people who could be any one of us.

Starting initially with sculpture in Paris, along the lines of Rodin’s disciples, it was thanks to a course that he followed at the Beaux-Arts which rapidly confirmed Daoud’s preference for painting in oils which enabled him to “give a soul to things.”

Despite the pervasiveness of migration, nostalgia, or absence in the works of Daoud, these are more evocative of dreams and poetry than of torment. Daoud has mastered the art of leaving his position to the mystery. Outlines of bodies are blurred, and colors are blended, weaving only the skeleton of a story that each one can tell.

Watch our interview with David Daoud 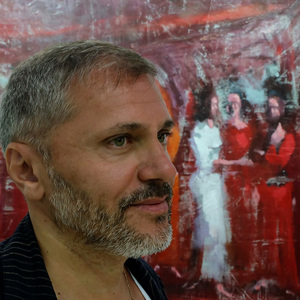