Iman Dabbous (b. 1999, Cairo) is an Egyptian-American mixed media artist that grew up in London, U.K. Currently, studying in New York, at New York University in the Studio Art BFA program in the Steinhardt School of Culture, Education, and Human Development, Class of 2021. She is predominantly interested in the distortion of figures and the human form, zoning in on mixed media and acrylic paint portraits. In her work, the use of color plays a major role using it in order to highlight certain aspects and narratives of her pieces. Her work has been featured in Architectural Digest online and has already exhibited her work at Leighton House in London. 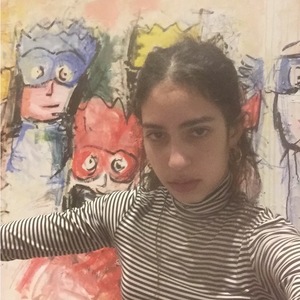