Born in 1968, Russian artist Timur D’Vatz offers a modern approach, one that is symbolic and figurative, to the traditional Byzantine and Russian art. With a personal interest in the art of alchemy, he creates his own artificial reality. D’Vatz’s works take the viewer to a mysterious place where one could achieve eternal perfection. The ritual of the hunt plays an important role in the path of spiritual transformation. Through rejuvenating ancient stories and legends of hunting, he tries to gain a new significance to historical and imagined rituals. Influenced by intricate patterns of the Nabis School, D’Vatz depicts the rich fabrics of Chinese silk printing. His shapes and patterns give the composition lyrical harmony. 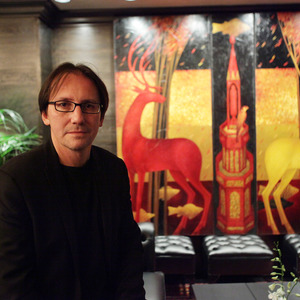