A native of Cairo, Chritch crossed the Red Sea to live and work in Abu Dhabi (UAE). But it was in Egypt where it all began in 1984 with a degree in Fine Arts in her pocket, as well as Honours from the jury. That same year she was awarded first prize for mosaics at the National Exhibition of Young Artists from Cairo.

Her beginnings were marked by an apprenticeship with Hamed Nada (1924-1990), a major figure of the Contemporary Art Group (Egyptian surrealist movement). She was quickly interested in the life of her artistic milieu, becoming a member of the Association of Egyptian Artists and the Coalition of Artists of Quebec. She is also a founding member of the art collective "Fanaan" established in Abu Dhabi in 2008. This collective’s ambition is to unite and cultivate the artistic talents of the capital of the United Arab Emirates.

Chritch’s work combines symbolism, cubism and abstraction, while having strong influences from traditional Egyptian art and Armenian calligraphy. Her works are performed on mixed-media canvases. The use of components such as oil, acrylic, charcoal, sand and collage is her foundation. These generously provide her with the desired compositions and shades. Faithful to the values and experiences that bind human beings together, she celebrates the world's diversity. Her work begins with a fragmentation of pictorial space in elementary geometric forms.

This method allows the work to be read from multiple angles and facets, and thus allowing the viewers imagination to act. Colours, shapes and textures combine, giving rise to figurative forms in abstract creations.

Chritch’s work reveals the hidden fragility and beauty of the human soul. She explores its implications in contemporary society, particularly through the concepts of migration, history and identity. 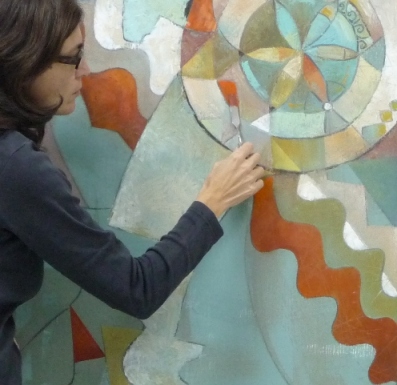