Here is one of the few young Moroccan artists – he was born in 1972 – for whom the creation of visual art is a showdown, a confrontation and a bet to win.

As a very inventive calligrapher, Larbi Cherkaoui has cleared the Arabic letter of its orthodoxy to become a universal sign placing it as an abstract type in an optical space in the cosmogony. Lyrical, suggestive, the movement subverted the normality of literal shapes that will impact differently on the skin in optimum shock waves, in spontaneous spots and coiling in both a eurythmic and emblematic grid. It is a secret composition/puzzle which requires prior initiation. The contrast element, notorious of the artist, brings back a calibrated result with cryptogrammatic traces.

The lighting effects enhance the warm colors and quality of the pigments. It sometimes feels like assisting in graphic resolutions of a new genre with a tendency to verticality : symbolic allusions to severely truncated lettering, which probably is intended exclusively for the eye, except for the sound. The emotional writing is void of any aestheticism, translated energetically in pure abstract forms.

With the arrival of the work of Larbi Cherkaoui – with a polychromatism which is not necessarily a style: colored shades, a game of indepth focus and light showers spilling over the sides – it is certainly a step forward in the research, extending it to other colors and other values in order to appropriate the spirit and substance, but constantly refering to the socially defned linguistic legacy, provided by the heritage, or the retention of the identity claim can be located culturally. 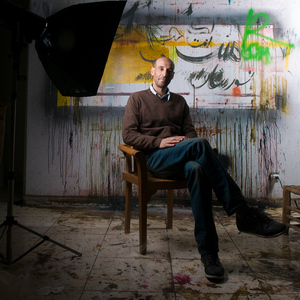