Born in 1907 in Aleppo, Syria, Armenian artist Karnik Zouloumian later known as Jean Carzou, moved to Cairo, Egypt in 1919 to attend school and then to Paris in 1924 to pursue his studies in architecture. He later on graduated from the Montparnasse Art Academy. In the 1950s, Carzou created costumes for various operas and ballets in Paris. He also illustrated many books, notably Ernest Hemingway’s “A Farewell to Arms” and Albert Camus’s “Notebooks”. In 1956, Carzou was knighted the French Legion of Honor and in 1976, he became the first living artist to have his work "Distant Princess" appear on a French postage stamp. Carzou died in France in 2000. 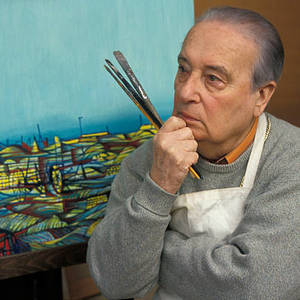