Georges Bassil, born in Beirut, Lebanon in 1965, is a self-taught artist who began his career in 1995. Bassil has been producing art throughout his life, and focused on manifesting his creative talents through the craft painting. As an autodidact, he has relied on his emotions and experiences as sources of inspiration. Bassil’s works depict human figures, with a focus on the female form and the emotions relayed through her features. He engages with the human soul in a discourse through his use of transparency and light application of pigments, which allows him to express elements of transience and a connection with the ether. In a world that grows increasingly zealous, he recreates his visions on warm fabrics, with figures that are indifferent to the stares and scrutiny of viewers, existing in their own world, lost in their thoughts and feelings. They exist without judgment. 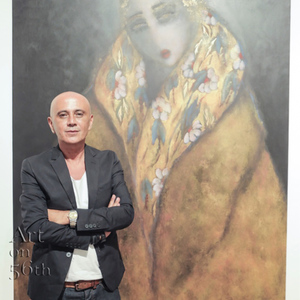