Oussama Baalbaki (b. Lebanon, 1978) received his BFA from the Institute of Fine Arts, Lebanese University in 2002. He has participated in numerous group exhibitions in a wide array of institutions in Lebanon, including the Sursock Museum, and abroad in the cities of Abu Dhabi, Dubai, London, Miami, Munich, New York, and Washington. His solo exhibitions include Paintings in Black (2004) at Dar El Nadwa, Scenes of Isolation (2007) at Safana Gallery, Less smoke, and more… (2009), Rituals of Isolation (2011), Spectres of the Real (2015), Pleadings of the Light (2017) at Agile Art Gallery, Shadows of Gloominess (2014) at Galerie Tanit, hosted in collaboration with Agial Art Gallery, and Against the Grain (2018) at Saleh Barakat Gallery. In 2009, he won the silver medal for painting at the “Jeux de la Francophonie”. Baalbaki lives and works in Beirut. 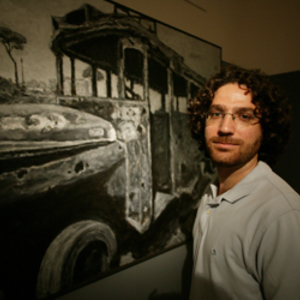