Hussein Baalbaki was born in 1974, in Beirut, Lebanon. Baalbaki's works belong to a genre of painting that presents innovative reinterpretations of abstract expressionism. A graduate of the Lebanese university's institute of Fine Arts in 2002, he has been exhibiting locally since 1999. A participant of the 2003 and 2005 Tehran Biennials, he was honored with a special prize. In 2008, Hussein had his first solo debut at Agial art gallery in Beirut with the exhibition "Accumulation of Time, "A body of small and large-scaled abstractions that garnered critical attention.” In 2012 he had second solo exhibition entitled "Four Season's Songs" also at Agial art gallery. In 2013, he had a third solo exhibition entitled "Garden of the Soul" at Dar-el-Funoon gallery in Kuwait.

The thick application of medium in his paintings makes for a textured surface that offsets the subtleness of a soft palette. The artist describes this striking presence as "a kind of isolation in the composition of the work (that serves) to introduce a sensitive illustration of the entity of the work, [which is] derived from internal nature, such as cave walls."

This "illustration" invokes a particular state or human experience  that possesses its own distinct philosophy. The implication of light that is seen with the manipulation of color is essential to his paintings as it indicates variation and movement and suggests infinite space and time. 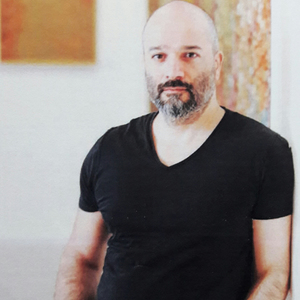