Lives in Russia
Elias Ayoub’s painted figures are embedded in either realistic or dream-like landscapes and depict relationships or emotions. “I work in an expressive symbolic style… dominated by abstract spaces,” he explains.
Born in Damascus, Elias Ayoub (1986) graduated from the Department of Painting, Faculty of Fine Arts, Damascus University and obtained a Master’s degree at Kursk State University, Russia. He is currently working on a PhD in the history and philosophy of art at the Surikov Art Institute in Moscow. Working in different styles, his expressive figures and scenes have emotive colours and organic flowing shapes while other works have an angular and geometric approach, or even a combination of both styles together.
Elias Ayoub has participated in group and solo exhibitions and art fairs throughout the Middle East, including the Beirut Art Fair, Lebanon. Further afield, Dubrovnik City Museum, Croatia; Museum of Contemporary Art, Rostov-on-Don, Russia; Annual Photography Forum in Opole, Bologna; among others. His work is in public and private collections in the UAE, Egypt, Sweden, France, Denmark, the USA and The Netherlands, Syria, Russia and Croatia. 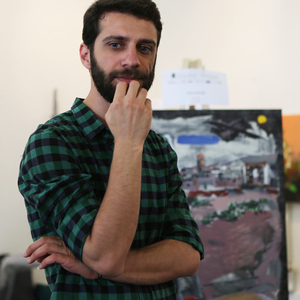