Born in Dakar, Senegal, in 1949, Aziza Assad is a self-taught Lebanese painter. Influenced by the diversity of her cultural heritage, she asserts her experiences of traveling around the world in her art, which is characterised by a particular architectural style. Assad’s paintings are grouped in two: compositions and portraits. Based on geometric lines, the compositions’ main themes are space, nature and asymmetry. The portraits however, suggest a constant search of identity in different forms.

Watch our interview with Aziza Assad 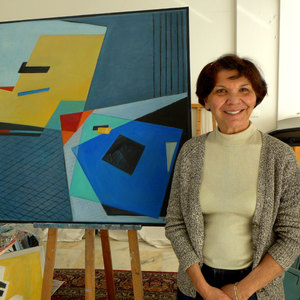