Egyptian artist Mamdouh Ammar comes from a family of artists for three generations, with a career spanning over six decades. His works reflect an influence of expressionism, symbolism and surrealism. Born in 1928, Ammar graduated from the Faculty of Fine Arts in Cairo in 1952 – year of the July 23rd Revolution. He soon joined the Contemporary Art Group as they were in the midst of creating a spectacular Egyptian Folk Realism movement in which art and politics blurred. A two-­year apprenticeship in the studio of Turkish watercolour master Hedayet; a close student-teacher relationship with Beppi-­Martin and Hussein Bicar; and further studies in Paris and Rome enabled Ammar to build a multi-faceted narrative in which spirituality and humanity became the central themes. Ammar narrated the story of a society immersed in magic, deeply-rooted popular rituals and plebeian folklore in search for alternative answers. Overwhelmed by the different wars his nation and the region engaged in, Ammar went on reflecting on the atrocities of war and the agony of conflict in the broadest sense. By the end of his career, Ammar rose as a deeply human artist who found freedom in the generative power that emerges out of solitude and exile. A testimony to our history (and failure to learn from it), Mamdouh Ammar is a socially minded and prolific artist whose rediscovery may well be a silent nod to an extraordinary and overdue legacy as he foresaw the urgency to convey the importance of a collective sense of a shared fate. 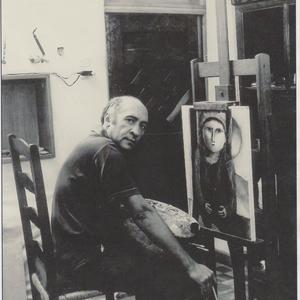