Born in Iran in 1978, multi-talented artist Hojat Amani received a diplomas in Fine Art at the School of Higher Education in Isfahan, Iran, and in Persian Calligraphy Society in 2001 and 2003 respectively. Coming from a very traditional family, he began during his teenage years to work on calligraphy, a signifier of liberation and purification. Amani integrates the traditional with the model in his art. His aim is to give viewers a cathartic purification and a promise of freedom from the difficulties of contemporary life. Amani has participated in art residencies in London and Lithuania. 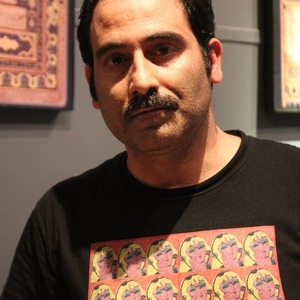