Born in Latakia, Syria in 1956, Mustafa Ali is a sculptor trained at the Faculty of Fine Arts in Syria then in Carrara, Italy. He won numerous prizes including the Golden Prize for the Latakia Biennale (1997), the Bronze Prize for the Sharjah Biennale (1992) and the first prize for competition held by the Arab World Institute in Paris (2008). Ali has shown his work around the world in solo exhibitions, notably at the Fayrouz Gallery in Bahrain (2000), Gallery Dahab in Beirut (2013) and Gallery Ayyam in Damascus (2011). His group shows include the exhibition Collective  at Mark Hachem Gallery (2014), the Syrian National Museum (2009) and the exhibition with Nazir Ismail in Doha (2011). 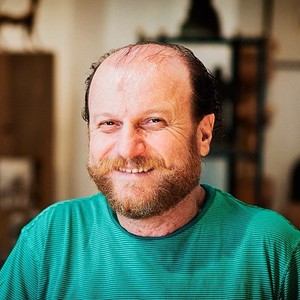