Ali Al Tajer, born in 1962, is an Iraqi painter. The artist has been a member of the Association of Iraqi Artists since the early 90s and a member of the Organization of Iraqi Fine Artists since 2002. Al Tajer’s early work consisted of illustrating for renowned magazines and newspapers in Iraq. He also animated a film for Iraqi television. The artist earned a master’s degree from the College of Fine Arts at the University of Baghdad in 1992. During his academic years, Al Tajer focused his research on human and animal motifs, traditional Iraqi architecture and heritage, and studying a contemporary artistic vision of the Epic of the Creation of Babylon. The textured layers of paint in his works are characterised by vibrant and intense colours spread out with a painterly brushstroke. They are sensitively crowded with Iraqi traditional elements and customs, flowers and particularly roses are a recurring feature in his works. 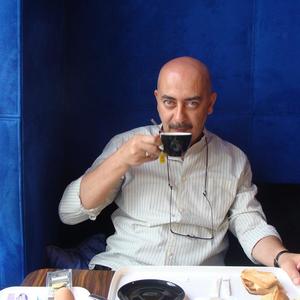