Abdulrahman Al Soliman is a Saudi Arabian Postwar & Contemporary painter who was born in 1954. Al Soliman’s paintings are created from memory; his canvases celebrate images of home, farms, markets as well as the distinctive and delicate women in his life. Towards the end of the 1970s, Al Soliman began to strongly identify with the “local art” movement. He actively embraced this artistic persona and deeply believed in drawing attention to all facets of his national Saudi Arabian heritage and local memory. His first exhibition in 1971 was organized by Al Itifaq Club in Dammam. He studied and developed his practice alongside the artist Mousaed Al-Ghrami and other members of the groundbreaking Dar Al Funoon Al Sa’udiyyah (The Saudi Art House), the first independent space entirely dedicated to art in Saudi. The members of the group included Mohammed Al Saleem and Abdulhalim Radwi.

Al Soliman's  works are the ultimate amalgamation of things seen and experienced, of images that influence and breathe life into his work.   Throughout his oeuvre, Soliman demonstrates affinity for local architecture and nature, and illustrate his artistic techniques and holistic approach. The uncanny resemblance to many European Cubists such as Pablo Picasso and Georges Braque demonstrate the mimetic quality of the artist's early body of work – light and shadows in a very sophisticated architectural setting.

Al Soliman’s artistic influences can perhaps best be explained by his multifaceted contribution to the art scene. He is both an artist and author. In his role as an art critic he published The March of Saudi Art in 2000, which is an in depth examination of Saudi art, and serves as a source of information for many recent articles and young emerging artists. Currently Al Soliman is the Fine Arts Editor for Al Yaum Newspaper and has been in his role since 1983. Although his text focuses on local art, it gains relevance due to his wider knowledge of art history. Art criticism after all must presume a holistic understanding of the art world. Thus, while his vision is one that approaches Arab art in its totality, he is ultimately an artist whose work is colored by a multitude of influences, developing his style into one more intimately involved within the context of his local community. 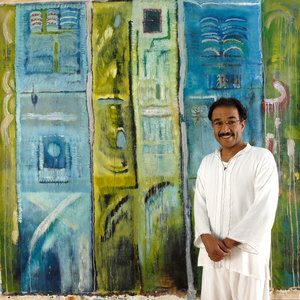