Mohammed Al Mahdi was born in Bahrain in 1976; he lives and works in Bahrain. An artist and designer, the artist’s relationship to drawing and painting could not be more particular: As a child, he discovered charcoal in the streets and began to fill the wall of the neighborhood with his drawings and then he turned to color pencils, without knowing that after a serious accident he would spend a long time in bed with little company other than painting and drawing. Years later, as the artist began to search for his own personal style, he found the drawings from his childhood and decided to adopt this style as a story-telling device through which he would narrate a story of his own and then would venture into the world looking for everyday moments that acquire a dream-like appearance from which the gaze is never withdrawn.

Free from specific time and location, his paintings are an open creative reading of the visual world, and the stage of a clear gladness from which longing and memory are not exempt; the optical irreverence of consciousness is deployed in a suspended state. One of the leading emerging practitioners in Bahrain, Mohammed Al Mahdi’s work has been exhibited in numerous solo and group exhibitions in Bahrain, Kuwait, Syria, Lebanon, Morocco, Saudi Arabia and Switzerland. One of his paintings, honoring the memory of a toddler disappeared mysteriously in Bahrain is showcased at Bahrain National Museum and new works were presented at “In the Open”, an exhibition of contemporary art from the Kingdom of Bahrain (2013) held in Edge of Arabia, London. 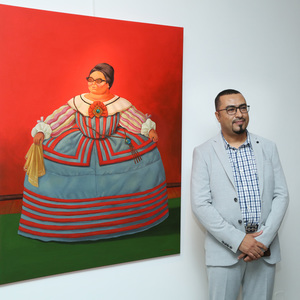