She has graduated in Fine Art from Soureh University and Jahad Daneshgahi in 1998 and 1999, respectively, in Tehran, Iran. She then pursued her education in the field of art in Germany and Greece.
Her paintings have been the subject of several solo and group exhibitions in countries such as Iran, Greece, Italy and the UAE. She is an official representative of UNESCO in Iran.

Firoozeh’ s works are related to ancient seals and symbols hidden in museums and books, dating back to 5000 years B.C. She believes that such seals, symbols and ancient myths have had a common impact on human identity and on the behavior and feelings of people across all nations of the globe. The inspiration behind her art pieces come from the magical Iranian colors on the tiling of mosques, architectures of ancient cities such as Isfahan, Kashan, Shiraz, as well as by the traditional color nuances typical on ancient glassware or antique Persian carpets and kilims. With the fluidity of antique colors and the dispersion of lines and hidden images, her works create movements that invite the viewer to travel in the past through the eye-catching colors and shape, a symbolic abstract space that links yesterday’s world to today’s modern life and thoughts.

She currently lives and works in Tehran, Iran. 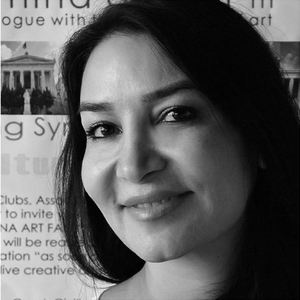