Combo, aka Combo Culture Kidnapper, is a street artist who was born in 1989 in Amiens, France to a Lebanese-Christian father and a Moroccan-Muslim mother. This dual religious background would come to greatly influence his artistic trajectory and personal message.

After graduating from Villa Arson in Nice, he worked as an artistic director for advertising agencies in Paris. But by 2012 he decided to dedicate his time to an earlier passion for street art, wherein he developed a signature style. This would come to import and recycle popular cultural icons mixed with urban myths, comics, cartoons, video games, paintings and photography. Relevant to his work also is the call for peace between people of different faiths that took on the greatest significance with the 'CoeXist' slogan that he sprayed across Parisian streets after the Charlie Hebdo attacks in 2015.

Combo's work is an expression of a humanistic ethos and a call for inter-religious understanding as well as taking risks to convey strong messages combined with his travels around the world. For example, he infiltrated the forbidden area of Chernobyl to post advertising denouncing nuclear energy in relation with the anniversary of the accident at the Fukushima Plant. He also posted Google pages in Hong Kong that had been banned by the Communist party, including for the arrest of artist Ai Weiwei. Whilst in Beirut, Lebanon he posted 'Less Hamas, More Hummus'; and, at the start of 2017, he parodied posters of the candidates for the French presidential election by posting electoral billboards.

The majority of his work is made of wheat pasted prints that he un-pastes and then pastes back on canvas. His most famous graffiti has been the 'CoeXist' project in which he campaigns for tolerance by a visual text incorporating the signs of the three Abrahamic faiths: a Muslim crescent for the letter C, a star of David for the X and a Christian cross for the T. He was, in fact, attacked and beaten up in 2015 whilst painting a wall at Porte Dorée near Paris as part of this project.

Always current and topical, Combo is a master at manipulating cultural symbols with historical and contemporary figures as well as adding textual quotes to encourage the viewer to think about the big issues of freedom, civil liberties, capitalism, consumerism, religion and extremist politics. His ultimate goal however is to advocate for peace, harmony and diversity whilst challenging false stereotypes. For Combo: “My pieces work in a disruptive way… they surprise. They are where they shouldn’t be.” 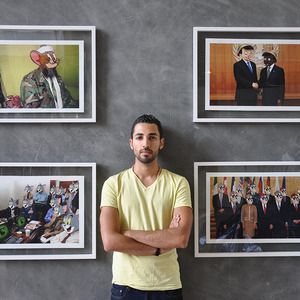