Satire and irony play into the work of Alaa Abou Shaheen, taking the form of figures and animals, or even common Arab tropes, drawing on caricature figures from popular culture and recognisable allegorical references, such as the donkey as a sign of stubbornness. His caricaturist pieces portray social concerns or criticism and his sarcasm is apparent when he is quoted as saying “if wisdom and knowledge were quantitative, then the enormity of the donkey’s head would have become a symbol of philosophy.”

Born in Damascus, Alaa Abou Shaheen (1982) graduated from the Faculty of Fine Arts, Damascus University in 2006 and worked for a number of years in Aleppo as a Fine Arts Professor. Driving his artworks is the burning need to express the contradictions and ridiculousness of life. His childish figures and animals are often distorted and exaggerated. Known for working in a variety of media, Abou Shaheen creates his characters in soft sculpture, metal, painting, collage and mixed media.

Abou Shaheen has exhibited his work in Beirut, Amman, Bahrain, London, Paris and throughout Syria. He was awarded the first national symposium prize for young sculptors at the Palmyra Festival in Homs and the third prize in sculpture at the Kamel gallery. His artwork has been acquired by the Yinchuan Museum of Contemporary Art in China. 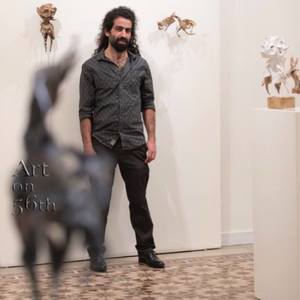