Sara Abou Mrad was born in Beirut, in 1988. She is a painter and a Fine Arts graduate from the Lebanese University.

She is a Plastic Arts teacher since 2010, at the school of Sainte-Anne des Sœurs de Besançon, Beirut.

In 2016, Sara created an art-based program designed to train blind children and help their integration into society. Her program was sponsored by Empowerment Through Integration Foundation and has been adopted in Lebanon since.

In 2018, Sara was selected among many Lebanese and foreign graffiti artists and painters for a graffiti project in Aley, Lebanon.

In 2019, inspired by the “October 17 Revolution”, Sara produced "Le Retour du Phénix", an installation on the front facade of the Grand Theater of Beirut. The general public participated in the creation of this installation made of 250 "Sleepers" in different sizes and glued by demonstrators on the facade. She also painted ten murals at the school of Sainte-Anne des Sœurs de Besançon in Beirut.

In 2020, Sara painted "The Negotiation", a volume painting in the gardens of the Résidence des Pins (the French Ambassador’s residence) in Beirut; at the French Embassy’s request, she produced the poster for "Music Festival under Lockdown".

She also designed the cover of the Arabic version of The Devil’s Crown (“La Couronne du diable”), a novel by French-speaking writer Alexandre Najjar published in French by Plon, France.

Sara created the sculpture symbolizing "Beirut, L’INSTANT T", designed from the debris of the August 4 Explosion and presented it to President Emmanuel Macron during his visit to Beirut for the centenary celebration of the Grand Liban.

In September 2020, Sara was admitted to the Cité Internationale des Arts in Paris for an artist residency (Fall 2020). 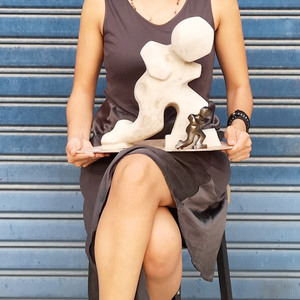