As one of the most established and recognised contemporary artists in Egypt, Mohamed Abla enjoys a strong following both among artists and art consumers in Egypt and on the international scene. Born in Mansoura in 1953, he is a painter, sculptor, engraver and installation artist with a focus on graphics and oil painting. As a modern artist he has combined techniques such as lithography with canvas paintings, photography with newspaper cutouts, all against a backdrop of heavily relevant political and social commentary. After graduating from the faculty of fine arts in Alexandria in 1973, Abla embarked upon a seven-year journey around Europe in 1978, where he visited museums in Spain, France, Belgium and Germany, eventually studying art, sculpture and graphics in Vienna and Zurich. He showed his first solo exhibition at the Hohmann Gallery in northern Germany, followed by shows at Gallery Ewat in Holland in 1989, Art Hall Orebro in Sweden and the Egyptian Academy of Rome in 1991, among others. After the birth of his son he moved back to Egypt, where he held several solo exhibitions around the country. In 1994 he won first place at the Kuwait Biennale, followed by the Grand Prix at the Alexandria Biennale in 1997. He has also participated in several international art events such as the Havana Biennale, and his work was part of several group exhibitions at the Kunst Museum in Bonn. In 2007, Abla founded the Fayoum Art Center where artists meet, work and collaborate. In 2009, he established the first caricature museum in the Middle East, also in Fayoum. He now lives in Egypt and works between Cairo, Fayoum and Germany. 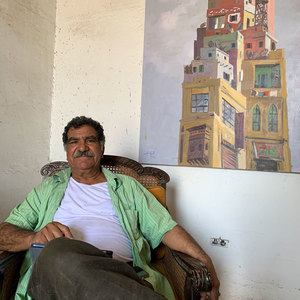