Abed Abdi was born into a long standing Haifa family in 1942. In April 1948, Abed Abdi, his mother and siblings were uprooted from their home, while his father remained in Haifa. After three years of wandering between Palestinian refugee camps in Lebanon and Syria, they were allowed back into Palestine as part of the family reunification program. Abdi learned painting and sculpting at workshops. Abdi then pursued academic studies at the Fine Arts Academy in Dresden (Germany) with, among others, Lea Grundig. His broad artistic range encompasses painting, graphic design, monuments and illustrations. Abdi has been a pillar of the development of Al Dakhel contemporary art and the creation of a new collective memory within his community through the building of memorial monuments and the circulation of prints through newspapers. In 1994, Abdi was one of the Founding Members of the Khalil el Sakakini Cultural Center in Ramallah in 1998. He has received numerous awards and has exhibited extensively in Europe and in Palestine. He currently lives in Haifa.

Abed Abdi has been promoting Palestinian culture, intercultural exchange and peace through art for more than three decades. As he explains, “art must be committed and play a role.” Deeply influenced by his art education in Eastern Germany, Abdi is also one of the first artists to integrate western influences and techniques within his work. He began as a figurative painter and later evolved towards abstraction. His works may seem at first calm, almost muted. However, the use of concrete and rough textures, mixed with fragments of everyday objects, conveys a strong view about his people and his culture. In the 1990s, fragments of jute bags, carpets, jewels, glass, and other materials became recurrent in his works, used as a way to tell stories of broken lives. The jute bag is omnipresent: the UNRWA distributes them in refugee camps. Resources being scarce, the bags are often recycled, becoming carpets, tents, and other everyday objects. Seen from this perspective, they are a symbol for the tragedy of Palestinian refugees. 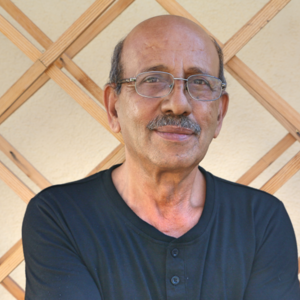