Samira Abbassy was born in Ahwaz, Iran and moved to London, UK as a child. After graduating from Canterbury College of Art, she showed her work in London for 10 years before moving to NY in 1998 to help establish and co-found the Elizabeth Foundation for the Arts and EFA Studios. She currently has a lifetime tenure.

During her 30 year career, her work has been shown internationally: the UK, Europe, the US and the Middle East.

The drawing acquired by the British Museum was shown in 2016 at an International Touring Exhibition: ‘The Human Image -Masterpieces of Figurative Art From The British Museum.’
In 2013, Abbassy was nominated for the Jameel Prize at the Victoria & Albert Museum, London.

She has been awarded grants and fellowships by: Yaddo, the Pollock-Krasner Foundation, the Joan Mitchel Foundation, the Saltonstall Foundation, (x2)NYFA, and an artist in residence fellowship at the University of Virginia. in 2018 she was nominated for the ‘Anonymous Was a Woman’ Award.

In the last few years Abbassy’s work has been the subject of six solo shows in NY, London and Dubai:

2014 “Conflicting Narratives” at B2OA Gallery, NY, in 2015 “Narratives: Hearts, Minds & Mythologies ” at the Bernstein Gallery, Princeton University, NJ.  Also in 2015 “Love & Ammunition"  at Rossi & Rossi Gallery, London. She has had 3 solo shows with XVA Gallery in Dubai: in 2015 “An Autobiography & Other Confessions” and in 2017 “Redemptive Narratives, Migrating Patterns” and in 2019 “A Night Sea Journey”.
Most recently her work was showcased at the 2019 Venice Biennale in the show: “She Persists” presented by the London based Heist Gallery.

Her shows have been reviewed by numerous publications including: Benjamin Genocchio’s review in the New York Times, Ariella Budek’s interview in Newsday, and Nisa Qasi for the Financial Times, and the Boston Globe.
In 2020 her work will be included in an exhibition at the Victoria and Albert Museum, London, as part of a historic Iranian art showcasing the Sarikhani Collection. 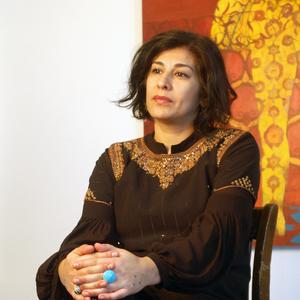