On looms, legacies and learning an art 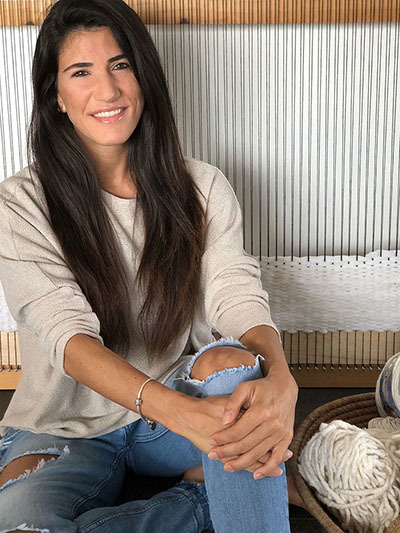 In her youth, the visual artist Michelle Maluf loved nothing better than whiling away the hours watching the talented women weavers practising their craft on the top floor of her father’s carpet business in Colombia, where she grew up. Little did she know back then that these formidable artisans would prove to be such a source of inspiration when, after relocating to Lebanon, she decided to explore the art of creating tapestries herself.

“I’d run up to the top floor, where the weavers would be hard at work, creating something fantastic from the leftover pieces of yarn and residues of carpet,” she said. “They were so skilled at what they did, I’d sit there simply mesmerised.”

As in several South American nations blessed with a rich variety of natural resources, weaving is a way of life for a number of Colombians communities, especially those located in remote, rural areas.

While Michelle felt a tangible connection with the Colombian weavers, however, her education beckoned, prompting a move to the US, where she completed a degree in graphic design and digital art, before embarking on a successful career in the creative industries. “I worked at Saatchi & Saatchi, which was a fantastic experience, given the company’s status in the world of advertising and marketing,” she said. “But it was also a lot of pressure and inevitably brought constraints on my time and creativity.”

Colombia’s wonderful weavers were never far from her mind, either, and a couple of major life changes – relocating to Lebanon and meeting her future husband – provided her with a timely opportunity to re-engage with them.

“I wanted to show my fiancé Colombia in its entirety, not only where I grew up, but also the beautiful remote parts,” she explained.

During their trip, the couple travelled to the Guajira Peninsula, in the northernmost part of the country, home to the Wayuu people, an indigenous American ethnic group whose heritage had long included weaving. Witnessing the women working on their looms in their natural surroundings, Michelle immediately knew that making tapestries was what that she wanted to do full-time.

“I was also completely taken aback by the beauty and quality of their craftsmanship –gorgeous hammocks and bags in vibrant colours – and fell in love with the entire process,” she said. “They were so proud of what they were doing and really passionate about it too.”

Michelle wanted her work to be as close as possible to the craft practised by the indigenous South American weavers. However, once back in Lebanon, researching their weaving methods proved to be something of a challenge.

“Carpet-making is extremely popular in the Middle East, but I realised that the methods and tools used are very different from what I saw in Colombia and wanted to practise myself,” she said.

With nothing to go on, Michelle decided, instead, to teach herself, building her own looms, which she gradually increased in size, and watching tutorials. Over time, she also became aware of the importance of giving her tapestries an individual twist, which she began doing by adding contemporary elements, inspired by her life in Lebanon and illustrated through the use of industrial materials.

“Lebanon is a country of contrasts; the old traditional buildings situated next to new ones, for example, and the different religions practised side by side,” she explained. “I like to relay these contrasts by adding different materials, such as leather, which is easy to access in the Middle East, and copper, to natural yarns. I find they complement each other really well, which is, in itself, symbolic.”

The result is a delightful mix of deep-rooted South American artisan craft and contemporary artistic workmanship, relaying thought-provoking, relevant messages. Michelle’s tapestries pay tribute to the region’s weaving communities in various ways, including their subject matter and name (The Inca and The Maya – both indigenous groups of people) and her choice of materials, which includes fique - a natural fibre that grows in the leaves of the fique plant in parts of Colombia, Ecuador and Peru. The vibrant and uplifting rainbow of colour featured in a work titled Pre Carnival, meanwhile, recalls the hues of the Aztecs, although the combination of materials (yarn, cotton and leather) gives it a thoroughly modern feel.

As someone who has always relished experimenting in her art, Michelle explained that she’s currently working on a couple of canvases that involve combining painting and weaving. “I’m really excited as it’s bringing two of my favourite things together,” she said. “I love to weave on any surface, whether that’s on old, neglected wooden chairs, filling holes. I’m keen on trying new things, although the concept of contrasts remains a passion of mine.”