Soha Ghandour gives ArtScoops a snapshot of her shift into photography, sources of inspiration and love of spontaneity 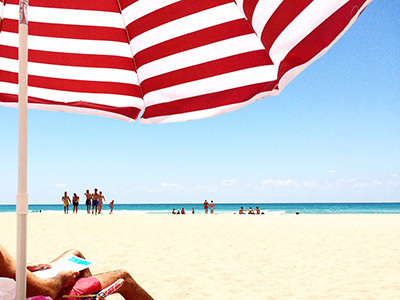 You decided to focus fully on photography after achieving success at the Byblos Bank Awards in 2016. How has life changed for you since that time?

I like to think of my move into photography as organic. Things began back in 2016, when I was working as an Editor and Researcher for a Technical Food Magazine (I’d studied Food Sciences Management at the American University of Beirut). In parallel, I’d started taking photos with my iPhone of scenes that caught my eye while I was out and about, such as people walking along the Corniche promenade or old, Lebanese arched houses. I began posting my pictures on Instagram and received really positive feedback from my friends. Later on, my mum suggested I enter some photos for a contest that the local newspaper L’Orient-Le Jour was running. I submitted five of my favourites; then, one month later, I had a call from Paris from the organisers who were coordinating the event informing me that I was a finalist! That competition was the turning point since it raised my profile and quickly led to other, knock-on opportunities, including my first show at BIEL. Following that event, I decided to invest in a good camera and leave my day job.

You’ve said that your interest in photography was prompted by heightened awareness of your surroundings. Were you not always a keen observer of everyday life?

Not at all! It was much more of a sudden awakening! I was walking by the sea one day and in a lightning flash, everything about the scene resonated with me, from the colours and the composition of what I was seeing to the ambience and setting. I felt a calling, an urgent need to verbalise what was in front of me via my camera.

Most of your pictures are taken spontaneously. What’s the attraction of catching ‘moments in time’?

I’m initially drawn to colours or, more specifically, the combination of colours in front of me. It could be an umbrella or deck chair perched on the beach, with alternating stripes of red and white set against the blue sky. I’m most fulfilled when I spot a natural scene with the composition simply taking care of itself. The sea is a particular favourite, especially when it provides the background to people and their stories. At the moment, I’m also exploring socially engaged topics in my work, such as minority groups in Lebanon, alongside the people I’ve come across during the protests in the centre of Beirut, and their stories. 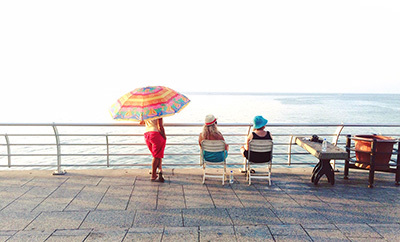 How do you decide on your subject matter and composition?

I don’t usually think about photography in terms of a specific topic, I just go with what I love the look of at the time. Later on, when I’m sorting through my pictures, a theme or a thread usually emerges, such as people going about their daily life or a social topic, like scavengers taking what they can from the garbage bags. Having this element of organic authenticity in my work is extremely important to me.

Your accolades include third place in the Travel category of the iPhone Photography Award (2018) for your photo of Tyre. What is it in particular that you like about taking photos with an iPhone?

The iPhone’s wide angle makes it a good medium for capturing ‘wide’ scenes, like the Tyre beach shot. Being portable, it’s also a convenient piece of kit, which helps people like me who enjoy working spontaneously rather than in a planned way. There’s something free-spirited about the iPhone too, the way it’s immediately available and accessible in a pocket, purse or hand. As a device, it’s also played a pivotal part in democratising photography, alongside social media. That said, as a professional, I usually have my trusty Canon camera with me as well when working.

What do you regard as your career highlights to date and what are you working on today?

Definitely the iPhone Photography Award in 2018. It was rewarding to have that recognition, especially since more than 140 countries participated. Having the picture featured afterwards in international publications, including The Guardian and The Washington Post, also gave me a real boost. The Tyre beach scene really seemed to touch people, with some viewers saying that even though it was shot in Lebanon, the photo seemed to be evocative of the South of France. I think people often find beach scenes quite emotive, perhaps because they remind them of childhood holidays. More recently, I took part in an exhibition of works by Lebanese artists focused on the current revolution which was exciting. I felt privileged to be part of what’s undoubtedly a milestone moment in our history. The show was also highly successful, which reflects the passion and feeling there is amongst the Lebanese people right now, irrespective of religion and demographics. My own photos are simply moments I felt the need to capture, both amongst the crowd and on the periphery. I’m also currently experimenting with different materials, adding metal and plexiglass to my photos, which is proving interesting. 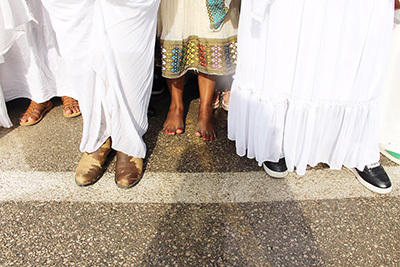