Beauty lost and what lies beyond (contd.) 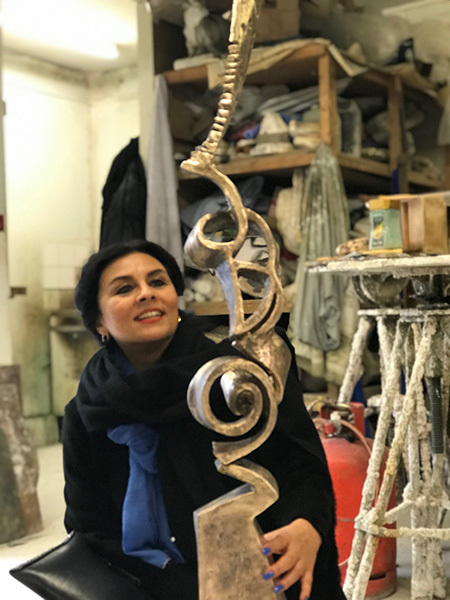 You often cite other artists with Iraqi roots who have moved abroad as an influence or at least among those with whom you empathise. What is the affinity you feel with these compatriots and their work?

Since the very beginning, when we moved to Iraq, the work of Iraqi artists fascinated and intrigued me.  It was my husband, the architect Ali Mousawi, who introduced me to the prominent artists of the day, many of whose works he commissioned for his architectural projects.  Besides professional connections, many were personal.  Saleh al-Jumae, for example, was a very close family friend stretching back to Ali’s early school days in Baqouba.  From the start, and over the years, he took immense interest in my art and was a major influence on my work, particularly that which I made in the 1970s and early 80s.  He was also part of a circle of artists including Rafi al-Nassiri, Dia Azzawi, Hashim al-Simirchi and a few others, many of whose work was incorporated in Ali’s buildings. Rafi al-Nassiri, who was also our neighbour, even designed our engagement invitation in 1973 (of which I still miraculously have a copy!).  Tariq Ibrahim was a close friend whose ceramic work was employed throughout many of Ali’s architectural designs.  He was instrumental in my first exposure to Iraqi ceramics. Neziha Selim, sister of the late Jewad Selim, was my teacher at BHS.  She took great pride in me as a student and constantly encouraged the other students to copy my work in their notebooks. Faraj Abbu, with whom I had private art lessons during my high school years, also taught freehand drawing at the Architectural Department during my student years there in the mid 1970s.  Hamid al-Attar, who was a very close friend of my father going back as far as elementary school in Kerbala, and others from Iraq’s earlier generation, including Selim, Mohammed Ghani Hikmet,  Hafidh al-Drobi, Shaker Hassan Al Said, Ismael Fattah, Khalid al-Rahhal, Kadhim Haider and Akram Shukri, as well as artists from my own generation, such as Rashad Selim, Sadik Alfraji, Iman Khaled and numerous others, have inspired my work and been instrumental in my artistic development and growth.
These connections paved the way for what was to become the pivotal project ‘Strokes of Genius: Contemporary Iraqi Art’ which I founded in 1995. This comprised the ground-breaking exhibition tour (UK/USA 2000-2003), the first ever online platform to collectively showcase Iraqi art - International Network for Contemporary Iraqi Art (www.incia.co.uk) - and the seminal publication of which I am editor (Saqi Books 2001).  In 2002, I co-founded Aya Gallery (ayagallery.co.uk) in London with my husband, where, until 2010, I curated and presented important exhibitions with a focus on and in tribute to Iraqi art.
Both my husband and I have been collecting Iraqi art since the early 1970s.  It is our ambition to eventually house the collection, of more than 2000 artworks to date in either our home in Baghdad, which we are looking to convert into a moderately sized museum, or indeed design and build a new museum in a prime location in the heart of Baghdad.  Regrettably however, due to the continued instability and unrest, this may take a while still, at least until Iraq heals and regains its standing as a vibrant cultural hub at the core of the cradle of civilization. The affinity I have with all of these artists is that very thread of identity that connects us as Iraqis, and it is this that has permeated my art throughout its evolving stages.

Many artists who have spent time living in more than one country, especially those with Middle Eastern heritage, find that the theme of identity is one they return to explore time and again in their work. How have you approached this theme in over the years and does your approach change in line with evolving events in Iraq?

Quintessentially, art is about who we are, the way we think and how we are perceived.  Consequently, art is largely shaped by our ever-evolving experiences be it the highly intimate and/or overarching world concerns.  Having left Iraq, a land in which I am deeply rooted, I have an inner compulsion to explore identity shaped by displacement, conflict, war, injustice, human rights, human wrongs and beauty lost.  My art is ever evolving, responding not only to events in Iraq and world events at large, but also to what lies ‘beyond’, often pondering on ‘spirituality’ and the transience of human existence.
The story I want to share is my challenge as an artist; a woman, a muslim and an Iraqi living outside the motherland.

Are some of these challenges greater than others and is it possible to combine your messages about them in your work or do you prefer to tackle them separately?

More often than not, it is inevitable that these challenges intertwine, and the work may reveal the various nuances, subtle though they may be.

Some artists tackle topical issues, such as the refugee crisis, overtly and others take a more subtle approach in their work. Where do you see your own art positioned in terms of expressing your feelings and do you feel that you have any control over the strength of your messages or points being made?

Expressing my feelings and thoughts is at times overtly clear (to my mind’s eye in any event) and at other times can be more subtle. Ultimately, art is subjective and therefore, no matter what control I believe I have over the strength of a message I am trying to convey, its interpretation is completely out of my power and it is up to the viewer to make of it what they wish; a process which is entirely subjective, personal and individual.