In an intriguing new series of works, Shahida Ahmed, a British-born artist based in the Middle East and UK, explores society’s failings and responsibilities to great effect. 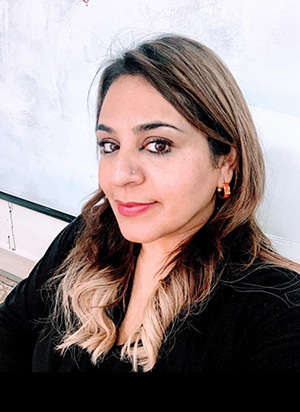 All artists hope to generate a reaction from their work, whether it’s starting a dialogue, adding to a conversation or encouraging their audience to pause and reflect on the subject in front of them.

Having reached a critical juncture in her artistic journey, Shahida Ahmed, a British-born artist based in the Middle East and UK, knows what impact she wants her work to make in the first instance. “I want people to be really curious about my work,” she says. “The idea is to trigger an inquisitiveness so that the viewer asks questions and wants to explore further.”

Nowhere is Shahida’s vision for her art more evident than in her latest series of works, titled ‘Children in a Lightbulb’. “I wanted to relay the message that children are the light of the future and that it’s critical for us to recognise the critical role earmarked for them,” she explained. “The lightbulb reminds us that in the interim, their formative years, they are surviving in a vacuum – a society which is manmade – and it’s our role as adults to nurture them, otherwise we’re damaging, or even taking away, their future.”

The collection has a distinctly international feel to it, in part because the inspiration for the series came while Shahida was travelling. “I first had the idea for the series while in Nepal, when I came across a child polishing shoes,” she explained. “The fact that children were working in this way at such a young age, rather than being in school, really resonated with me and was something I wanted to capture.”

The more Shahida saw on her travels, the greater her determination to relay the injustices and plights of children around the globe, from slave labour to the appalling conditions in which young Syrian refugees were living. Aside from highlighting Shahida’s commitment to giving children worldwide a voice, the series also dovetails with her desire to break down barriers and push through boundaries in her work.

That feeling of freedom is reflected in the variety of materials that Shahida uses, which ranges from clay to oils. “Like so many students, when doing my training I initially thought style, technique, having a theme and telling a story were essential,” she said. “Over time, as an artist I realised there were no limitations to art or need to categorise it. Those decisions should be made by the artist and that was incredibly empowering. They were also messages I wanted to share with viewers since the audience is the final piece of the jigsaw puzzle.”

That’s not to say her work isn’t full of social or political commentary; only recently Shahida donated a painting of a Syrian child in a cardboard box to the Mayor of Manchester in the UK, Andy Burnham, to be auctioned at a charity dinner for homelessness and was also asked to do a painting of a child polishing shoes in the street for Oxfam. “Leading by example is something I feel strongly about, whether it’s highlighting topical issues or showing minority groups that you can make a career as an artist,” she said.

One of the ways in which Shahida decided to show her solidarity with other women artists, irrespective of faith, colour or culture, and to move beyond stereotypes, was to change her signature in 2016 to the simple ‘She’.

Her ceramic sculpture work, meanwhile, is a way in which she clearly acknowledges her diverse cultural background. “I felt early on during my training with the highly respected Professor Jim Roberson that it was an under-utilised medium and also a beautiful material ideally suited to Islamic art inspired work,” she explained. The delicately crafted pieces are both indisputably modern, yet also authentic, enhanced by carefully crafted calligraphy and shades of topaz.

Her richly coloured paintings of whirling dervishes are another nod to her roots, while also providing a platform for Shahida to explore several issues that are close to her heart, including life’s ebbs and flows and its circular patterns, via metaphor. The space we occupy in society and its complex layers which increase over time, meanwhile, are explored in her collection of bubbles and abstract shape paintings.

Shahida is now embarking on an exciting new phase in her work, which includes creating a series of self-portraits, but with a twist. Her plan is to adopt the style of the renaissance period, in which the subjects were historically fair-skinned women, but insert her own face. The aim, she explained, is to help redress the balance of women represented in portraits and, more broadly, artists themselves. “I’m really excited about it,” she said. “Women have always been undermined and are still not given the same level of recognition as male artists. This series is one way in which I can make a statement on these issues.”

Shahida Ahmad’s work has featured in many solo and collective exhibitions. It can also be found in several private collections, including those of HRH Prince Charles and other high-profile personalities, and in prestigious institutions and buildings, such as 10 Downing Street.