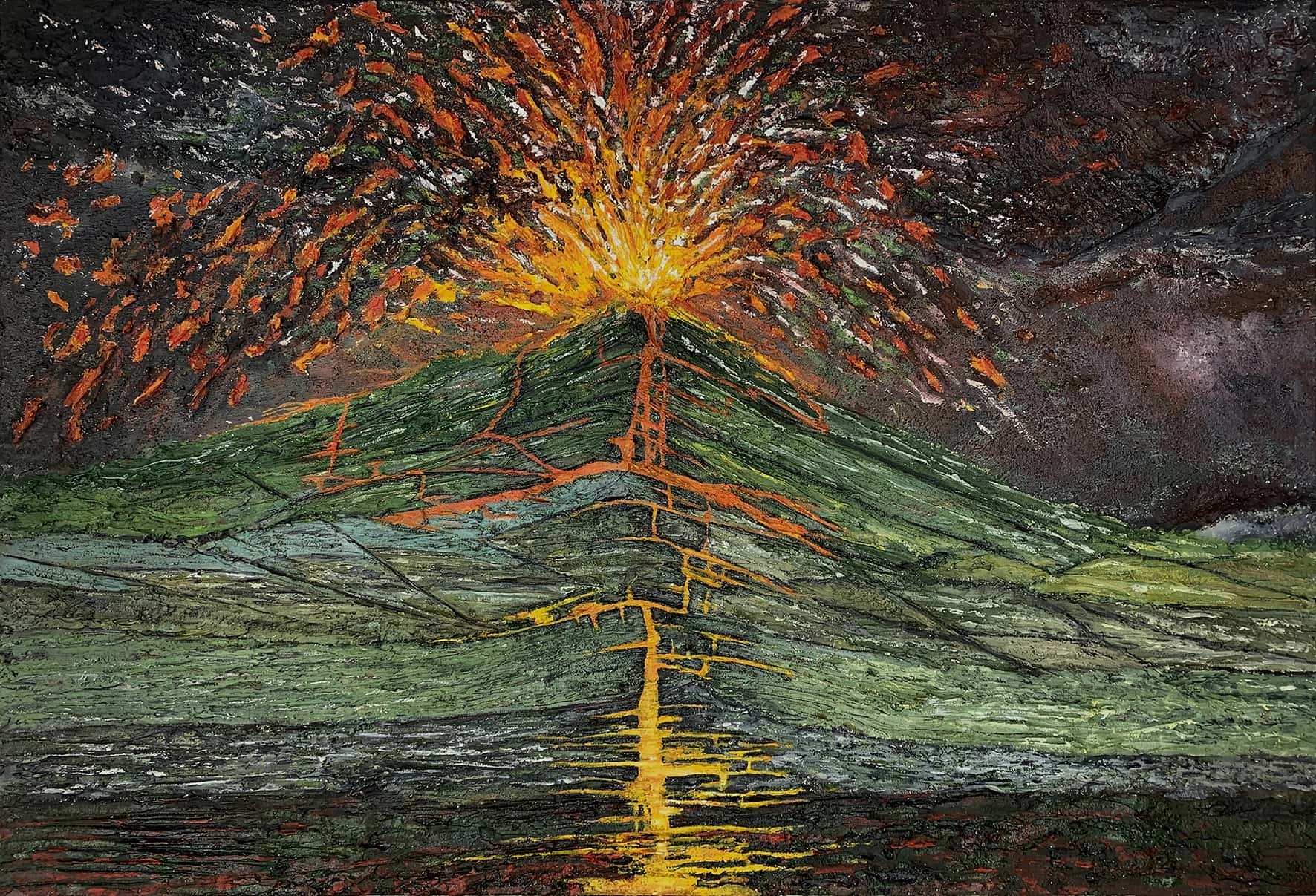 Directly inspired by the October 2019 Lebanese revolution, where I witnessed and lived the moments where people literally exploded on the streets of Beirut and all the cities in Lebanon, claiming for their basic rights, I compared the underground lava to all cumulative problems that Lebanon is permanently living during the last 30 years, then finally it has to explode in any way. The painting shows what is inside a stratovolcano, it is a sort of section view of what happens inside a volcano. There are layers of rocks, with different colors, referring to the different Lebanese societies, the sectarian system, the many religions, living together since the creation of Lebanon. These layers form together our precious cedar. The magma, which has been confined in the layers, and starts from the bottom, ended up erupting in a violent, yet a beautiful and very strong way. This magma is our rebellious people, who can’t bear anymore living in misery. The eruption carries the main Lebanese colors: white, red and green in addition to the main magma colors which are yellow and orange. The colors that exploded show the different people acting and thinking the same way in this revolution. There is a festive and winning spirit with this volcano, as all people from different environments, created this spontaneous and unpredictable movement, that has decidedly a very strong impact.

Born in Beirut, Tamara Haddad is graduated from Académie Libanaise des Beaux-Arts (ALBA) in 2005 with a master degree in Advertising, Tamara started painting in 2004 as a self-taught painter, while working in advertising and graphic design. In 2011 she quits advertising agency to devote herself to painting. Deeply influenced by architecture and photography, Tamara Haddad was first fascinated by large empty spaces that she captures with a camera, giving the landscapes a new dimension with painting. Today her work is focused on physical transformations that earth is enduring nowadays either caused by natural phenomena or by mankind actions. She focuses on the changes that affect the earth landscapes and its geology, showing scars, but at the same time, she insists on revealing the beauty and the variety of colors that Earth owns.

“Flaws”, her actual painting work deals with Tamara’s concern about environment, a subject that matters to her everyday more and more. Inspired from documentation and readings about environment, she is aware of the changes earth is living today, because of human actions. She is aware that the natural elements are no more the same, everything is affected and disturbed. Haddad doesn’t want to show actions of devastations or disaster through her paintings. What matters to her more is the result, the after effect, the aspect of the earth suffering, while insisting on the many colors and texture that earth is holding. In this first phase of her work, she wanted to discover the rocky landscape of the earth, the depth and the physical aspect of it, as the origin, the first beauty of the earth, which is also changing and destroyed. At the same time, she wants, through her artworks, people to be more sensitive and aware of the environmental issues we are living today.