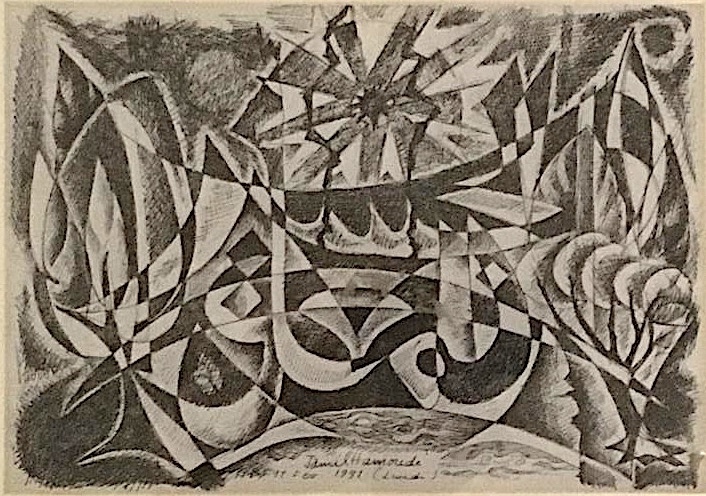 There are no obvious condition concerns. For a full condition report please contact us.
amman
Ships in up to 14 business days.
We guarantee the authenticity and provenance of our artworks.

Jamil Hamoudi (1924-2003 born in Baghdad, he  was a member of what is known critically as the Hurufiyya movement, a critical term for the regional interest in calligraphy and the Arabic letter that was popular throughout the 1950s and 1960s.

A leading figure in Iraq’s modern art movement, Jamil Hamoudi is recognized for a semi-abstracted art form that creates colorful and dynamic geometric compositions. Through the techniques of repetition, line, and shading, the artist brings depth and movement to the two-dimensional surface and brings into sharp relief the angular forms of Arabic calligraphy and arabesque.
Since his first solo exhibition in 1950, Hamoudi has exhibited internationally and his works are included in numerous museums and private collections worldwide. In his distinguished career, he was also a critic and published extensively on art.

Hamoudi began his career in Baghdad as a self-taught sculptor working in a naturalistic style. In 1944, he began teaching drawing and art history at a school in Baghdad while also attending classes at the capital’s Institute of Fine Arts. The artist graduated in 1945 and two years later received a government scholarship to continue his training in Paris, where he studied at École Nationale Supérieure des Beaux-Arts, Académie Julian, and École du Louvre. In addition, Hamoudi conducted research on Assyrian-Babylonian art and languages. His work is often considered to merge modern European aesthetics—particularly cubism and geometric abstraction— with his own cultural heritage to create a distinct formal language based on the spirituality of calligraphy.

In 1942 he joined the Friends of Art Society along with the leading artists Akram Shukri, Faiq Hassan, Jawad Salim, Hafiz Al Droubi, Issa Hanna, Suad Selim and Atta Sabri ... he became Secretary General of this association in 1946.

From 1942-1944, he presented many studies and researches related to the ancient Iraqi arts, civilizations and antiquities to the Iraqi Museum Library. The first edition of Modern Thought magazine was published in 1945 in Baghdad in Arabic under the slogan "Journal of Art and Free Culture". He was the director of publishing and editor-in-chief of the magazine. Then the publishing of  (studio) by  the modern thought center. A fine art journal specialized in fine arts which he was also its editor. He edited  A full page in the Arts journal on Iraqi Art through the Ages which appeared in April 1950. In the same year, an important evening about  the artist was held at the French Thought House.

In 1971 he joined the One Dimension Group when it was founded by Shakir Hassan Al Said.
He organized an international exhibition (Modern Thought Exhibition), in which artists from Iraq, England, Poland, France, Turkey, Syria and others participated in the exhibition at the Museum of Fashion and Ethnography in Baghdad under the managment and supervision of Jamil Hamoudi (1946). Together with Herbert, Hartonk, Schubert, Kutz, Bioti and others in 1949 at the Museum of Modern Art of Paris, he took part in the salon of the new facts of abstract art. And then continue to participate in important exhibitions in Paris and several times each year. The held his first solo exhibition in France for his work (1950) in the Foyel Hall - and it was the great critic Jacques Lassen who wrote the introduction to the exhibition guide and received the attention of the media intensively.

He held an exhibition at the National Museum of African and Peripheral Arts in Paris in 1986. He also participated in the traveling exhibition in America organized by the American magazine Crisales (New York) in 1951. He participated in the International Festival of Fine Arts held in Baghdad in October, 1986. He also contributed to the Baghdad Fashion Festival and delivered an important lecture on "Fashion in Sumerian Civilization" (April 1986). A large exhibition of his work was held at the UNESCO building in Paris.

He was responsible for technical matters at the Iraqi Ministry of Guidance and the National Museum of Modern Art. He also founded the Inana Fine Arts Hall and was its director and organized cultural symposia and art exhibitions in it.

The French Ministry of Culture awarded the artist Hamoudi the Medal of Arts and Literature (on the day of the above-mentioned exhibition). He also received the French Medal of Honor (2001).
He died in 2003.