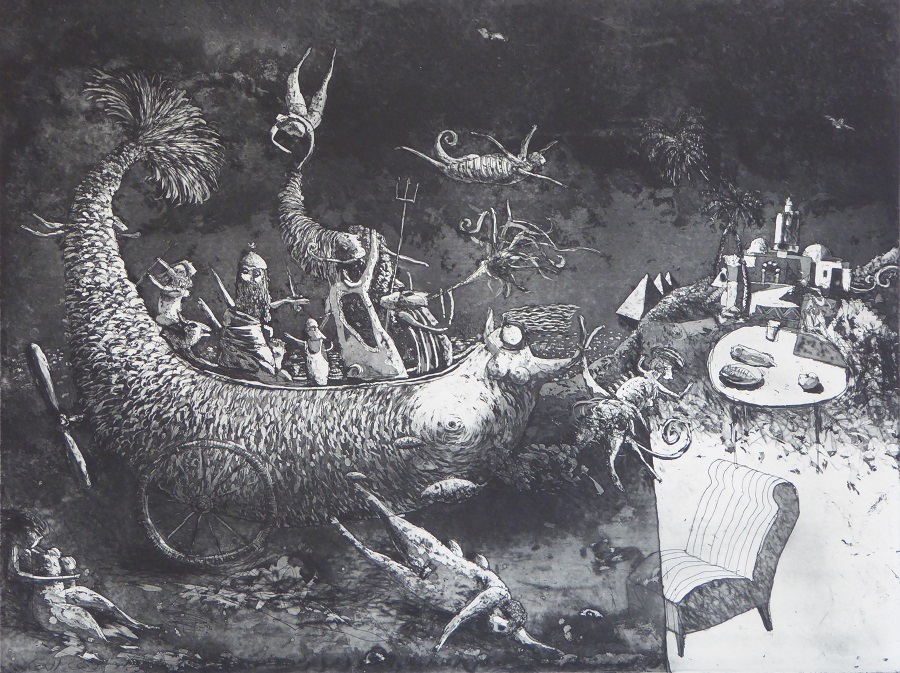 Halim Karabibene is an internationally acclaimed artist whose career took off in the 1990s.

His work is marked by two fields: collages filled with sarcastic undertones and skillful execution alongside dreamlike paintings filled with figures suspended in space, an outlet for his alternative universe. Karabibene’s exploration of his alternate universe is filled with subconscious lulls, memories from childhood, imagery of everyday surroundings that slip into manifestation, and the strange impulses of an unrestrained imagination.

His art is influenced by the European art practice and figures such as: Rene Magritte, Hieronymus Bosch, and Georges Braque. His art is also filled with influences that come from Bizerte, his hometown, and Roman mosaics in Tunisia.

In 2007, Karabibene began exploring a multidisciplinary performance (work in progress) as way to encourage public authorities to establish Tunisia’s first National Museum of Modern and Contemporary Art (MNAMC). He chose to symbolize the need for a national museum through a pressure cooker. Karabibene has performed and created art under the so-called commission of the MNAMC, though it is yet to exist. His call to action is still unanswered as the MNAMC is yet to be established.

From 1982 to 1993 Karabibene studied architecture in Paris, and attended the École Nationale Supérieure des Beaux-Arts. He did his artist residency from 1999 to 2001 at the Cité Internationale des Arts in Paris.

Karabibene was born in Bizerte, Tunisia in 1962. He has been living and working in Berlin since 2015.