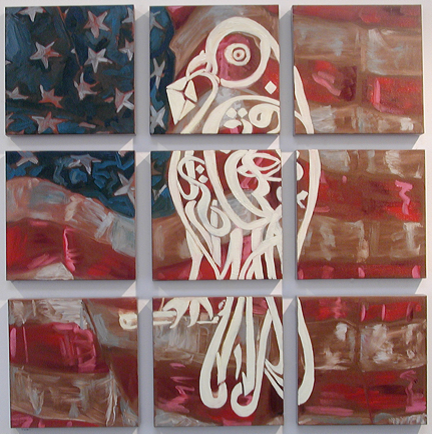 Save to Favourites Zoom Share
Doris Bittar
Follow Artist
Stripes and Stars: You Have Mail, 2002
Oil on canvas
84 x 84 cm

She was born in Baghdad, Iraq of Lebanese parents. A year later her parents returned to Lebanon. Just ahead of the Lebanese civil war, they immigrated to New York.

She graduated from a high school that imprinted her with a curiosity to bridge differences between people. After graduating with a Bachelors of Fine Arts from the State University of New York at Purchase, she worked as a union organizer for five years.

Her Arabic identity began to reveal itself and influence her art making as significant events in the Middle East unfolded - seemingly without respite.

She received her Masters of Fine Arts at the University of California, San Diego in 1993, and began to exhibit, teach, and write. In 2005 they moved to Beirut during dramatic political shifts.

She currently teaches in the Visual Arts department at California State University San Marcos, travels to gather the “stuff” for new projects, works with civil rights organizations, and writes.