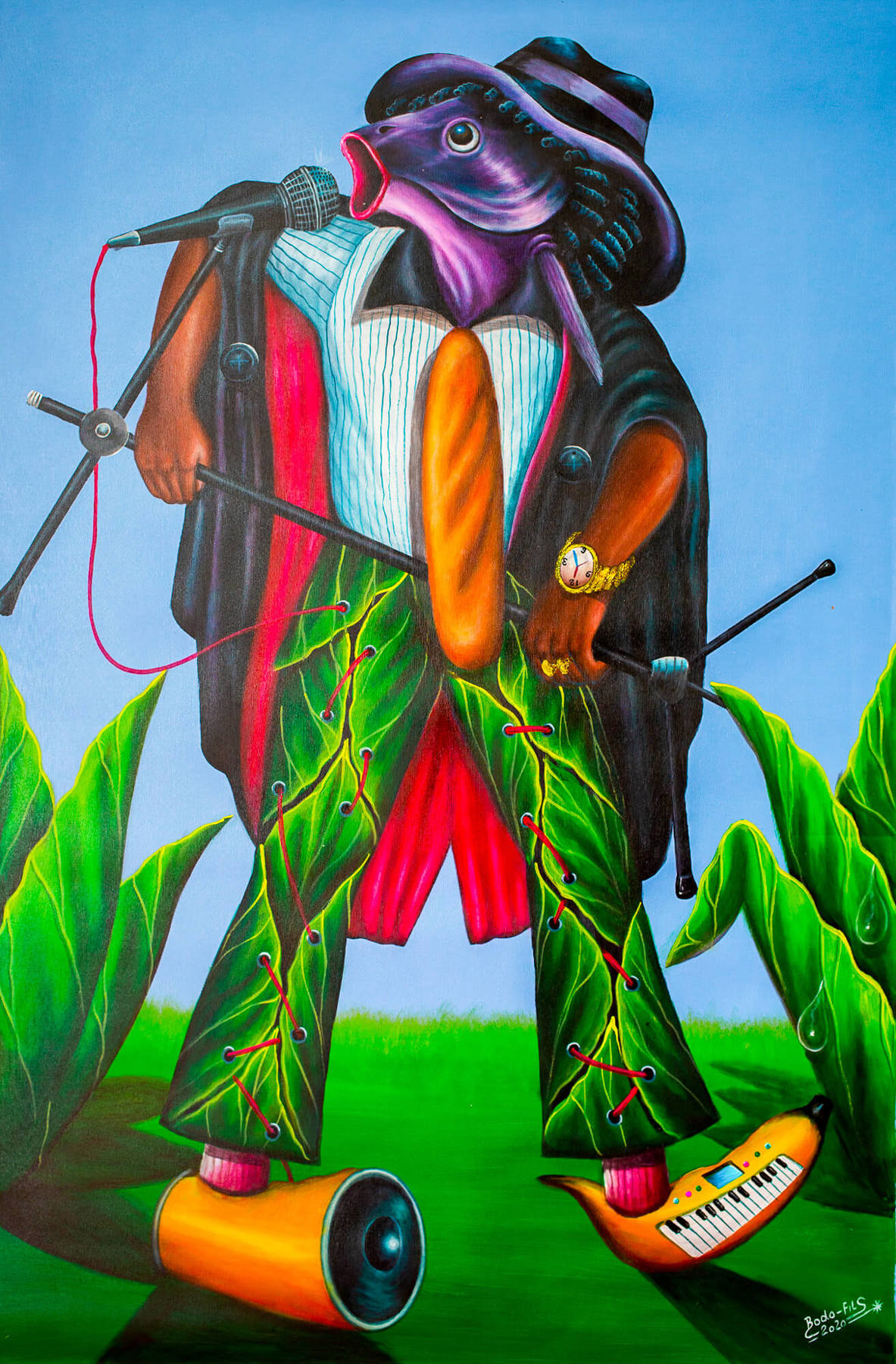 Directly from the artist workshop

M'Pambu Bodo Bodo, known as «Bodo Fils BBM», is the eldest son of the artist Pierre Bodo (1953-2015), internationally renowned for his paintings of dandies (Sapeurs). While today an artist with multiple talents, as an author, songwriter, interpreter, musician, actor and painter, as a child he was reluctant to continue his schooling and at the age of 12 he joined the family workshop, where his father Pierre taught him fine arts. In turn, the young artist Bodo Fils taught his brother Amani, who then started Fine Arts and created his own workshop. Bodo Fils BBM stayed on at the family workshop until 2013 and could thus develop his own artistic language, from contemporary to the most symbolic expressions.

While to learning to paint, Bodo Fils also studied music at the side of his father, a musician, and his mother who was a singer. His personal tastes spontaneously led him to favor music. Under the pseudonym DIGITAL, he made a career as a singer-musician in popular musical groups of the Congo.

In January 2005, Bodo Fils BBM participated in a major exhibition "Looking at 15 Years of Transition" at the Hotel Memling in Kinshasa. This exhibition earned him international recognition, earning him entry to the Contemporary African Art Collection (CAAC) of the famous French collector Jean Pigozzi.

After experimenting with popular style, Bodo Fils BBM found his way to figurative and symbolic painting with surrealistic accents, influenced by his artistic family universe. On the canvas, he stages his ideas, he denounces, he expresses his visions and sometimes even his dreams.

Describing the existential realities of the Congolese people, encapsulating religious or moral issues, and metaphorically restoring modern turbulence, Bodo Fils BBM expresses himself both in a surrealistic and poetic way. Often offbeat, sometimes disturbing, sometimes tinged with humour, his vision dares, from the horrific to the strange, through images of childhood, eroticism and fantasy. "My creative approach, reconciling tradition, respect for ancestors, modernity and openness to the world, is shared by the Congolese people through my poetry and is the bearer of hope for the rebirth of my country."

Bodo Fils BBM has recently returned to the world of "Dandies", which he has always loved and in which he excels, but never allowed himself to really invest in, in order not to encroach on the artistic universe of his father. In this series, Bodo Fils BBM denounces the void behind beautiful appearances. "To be well dressed is pretty ... But what am I doing? How do I act and why? What do I say to others?”

In 2016, Bodo Fils BBM presented his works in six exhibitions in France and Belgium, where more and more collectors of contemporary art began following him. His success was confirmed in 2017 when he exhibited in Switzerland and in 2018 in Spain.