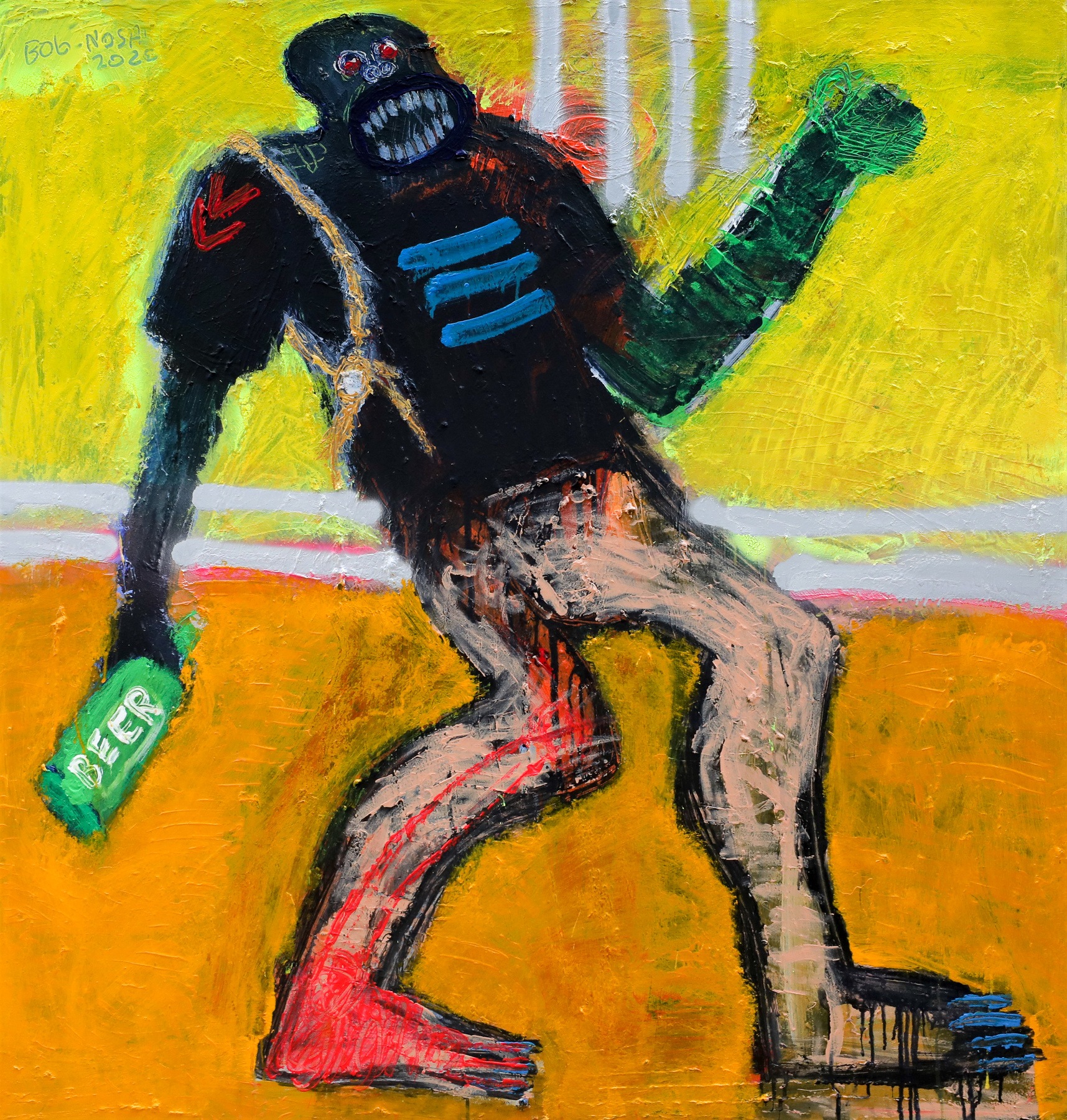 Directly from artist' studio
Perfect condition.
Barcelona, Spain
Ships in up to 14 business days.
We guarantee the authenticity and provenance of our artworks.

In the last decade, Bob-Nosa is one of the few artists working in Nigeria who has remained behind the barricade, constantly sticking flames in the face of authority, and irreverently responding with provocative works that speak truth to power. The sober tone expressed in most of Bob-Nosa’s works is a response to his traumatic experience of the death of his parents, combined with his indignation over social and widespread humanitarian crises. In addition to his continuous critique of the global political structure, the captivity of African immigrants and refugees traded in open market slavery in at the Libyan border, the endless atrocities carried out by Boko Haram terrorists as well as domestic violence, intensify a feeling of resignation and mourning in the works of Bob-Nosa. . With quasi street art forms of collage and spray painting, the artist uses satire and parody as a form of social activism that calls for change and transformation within Nigeria, Africa and the world.

Bob-Nosa’s art is inspired by the notion of “inhumanity”; he belongs to a minority group of contemporary artists who criticize government. Bob-Nosa calls his studio the Protest Art Studio where artworks that comment on social and political issues that aﬀect him are made. “My art makes social and political commentary as a form of protest art that speaks for the oppressed, the art that kicks against bad leadership, the art that condemns inhumanity and violence in our society. Where there is no humanism, it’s understood that a society lacks human sensibility and becomes a violent and beast-like society that tends to inflict pain or suffering on others. To be inhuman is to be cold, pitiless, unkind and without humane and kindly feelings as well as an ability to inflict or cause physical or psychological pain without hesitation or human feelings. Societies that don’t support human rights, dignity and freedom are commonly understood to not respect human values” says Bob-Nosa.

The themes in Bob-Nosa’s works, which he refers to as the consequences of bad political leadership on the ordinary man, deal with the world of vice, corruption, extortion, murder, illegal migration, inhumane treatment, human trafficking, violence, child labour as well as hate speech and war.

The scale of Bob-Nosa’s works, the use of materials and brush marks as well as subject, form part of his expressive vocabulary. His use of intense primary colours applied in large expressive strokes frequently also include collaged images and found materials. Surfaces are scratched with written text and aerosol paint is roughly sprayed over and across painted forms. Some of the collaged sections are from popular media and found materials from the streets of Lagos; these give the subject matter an immediacy as well as a sense of authenticity or credibility. “I am trying to liken the attitude of our leaders to that of animals. They are just animals in power, they are already rich but still loot money. They take more than what they need, leaving the poor masses in abject poverty.” says Bob-Nosa.

Bob-Nosa’s protest art condemns inhumanity and he seems to hold the view that the loss of human values demonstrates a contempt for democracy. His art as an activist based at The Protest Art Studio is an attempt to provide a much needed strong voice. As an alternative artist, or an activist voice that comes from a protest sub-culture, his dissent provides an alternative. He sees the individual as a victim or part of a predominate apathetic group mentality that justiﬁes a collective “everyone does it” mentality. He is making a call to artists to consciously decide to become agents of change within a system of social decay. His distortions and satire seem to call for a new mental picture of leadership to be revisualised into a better version of humanism. It is in such spaces that visual artists can become activists by using artistic freedom of speech as weapons to bring the much needed social and political changes. Their ﬁgurative works become powerful satirical comments about inhumanity.

To be, to exist, means to be do so for the community, for the other, with the concept of the self being able to emerge from and through the relationships with others. It is in this type of view of humanity that one feels that Bob-Nosa’s art and his Protest Art Studio can play a very important role in contemporary art in Africa. Bob-Nosa says "I would like to be remembered as an artist and a humanitarian.”

Bob-Nosa Uwagboe is a mixed media Nigerian artist born in Benin City. He studied ﬁne arts at the Auchi Polytechnic. He is known for making paintings with entertaining characters, usually with the intention to satirize political anomalies and social phenomena.
Many of his works have been criticized for their childish simplicity and indifference to decency. Some of these images have caused anguish as they include dismembered limbs which allude to victims of suicide bombings, or skulls and skeletons referencing deaths from religious, ethnic and domestic violence in Nigeria.

At other times Bob-Nosa paints corrupt politicians, policemen, and people in vile situations. Bob-Nosa, who has always maintained that his creative process occurs in a moment of calmness, anger, pain, and passion, deﬁes censorship to make audacious works with risqué details.

Bob-Nosa has earned praise for his sincerity and courage, but he has also been viliﬁed and dismissed for his obsession with salacious and explicit displays. Now, his artwork is recognized in Nigeria, Cameroon and South Africa but now in the USA, France and the UK too.