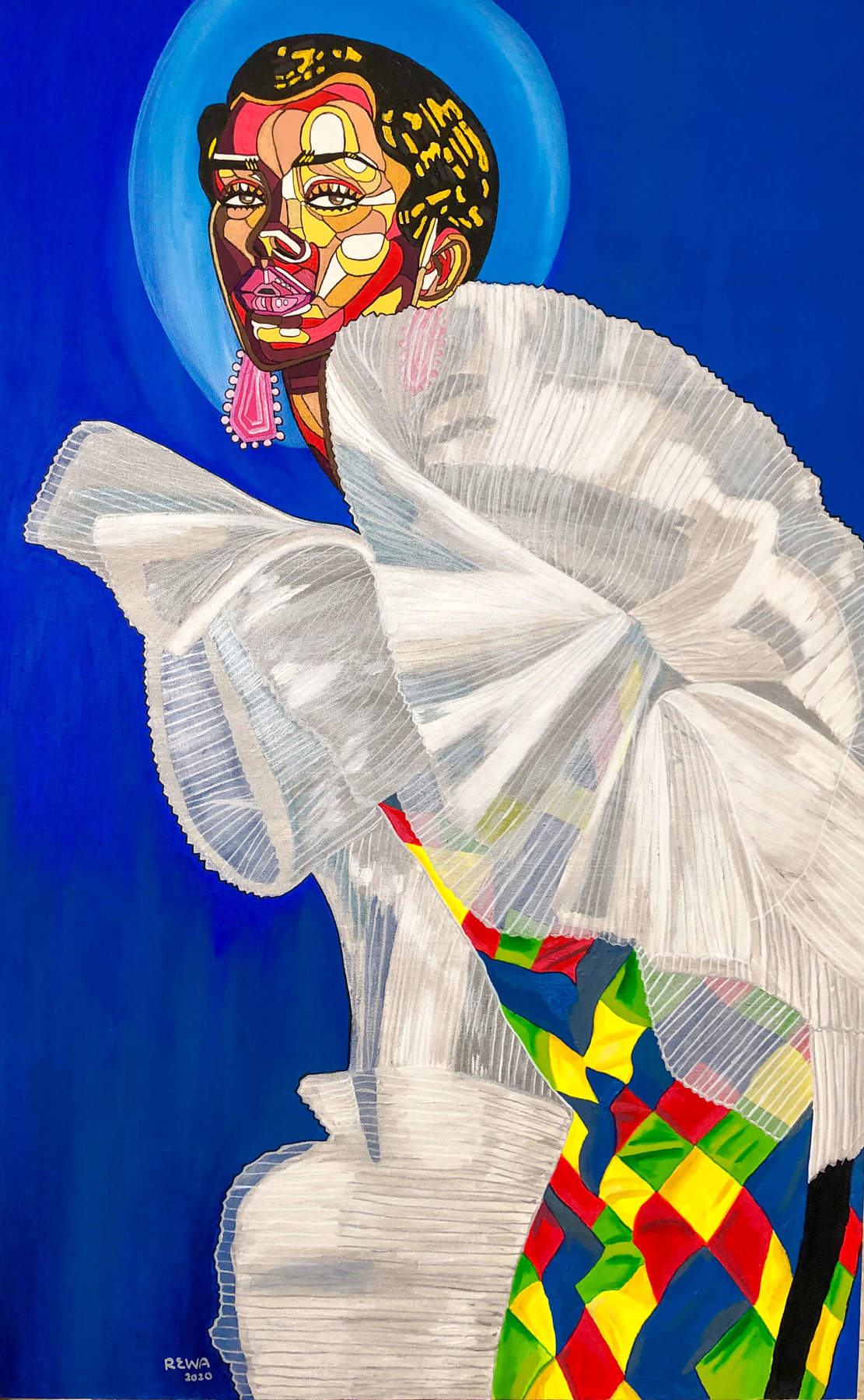 Directly from the artist' studio
Perfect condition.
OOA Gallery - Carrer Nou 1 - 08870 Barcelona, Spain
Ships in up to 14 business days.
We guarantee the authenticity and provenance of our artworks.

REWA was born and raised between Nigeria and England and received a BSc. in Physiology and Pharmacology from University College London (UCL). Never having received formal art training, she is self-taught and developed her innate talent from a very early age. She finds that her spirit is moved by what she refers to as "depicted sentience" and through the celebration of the female form and bright, vivid colours. Her preferred medium of acrylics and ink on canvas provide the immediacy, proximity and transparency to express her most personal experiences and influences living between Lagos, London and Johannesburg, cities she considers home.

REWA’s primary body of work, The Pantheon, celebrating Nigerian deities, led to her appointment as ReLe Gallery’s 2017 Young Contemporary in Lagos, Nigeria. In this same year, the prestigious Gallery of African Art (GAFRA) in Mayfair, London invited REWA to participate in a joint exhibition, Her Story: Sisterhood That Transcends. Her collection, Onicha Ado N’Idu delved into the significance of naming rites and traditions within the Igbo culture in Nigeria.

REWA had her first solo show in 2019 at the Jonathan Ferrara Gallery in New Orleans, Louisiana where she showcased her NWA AGBO: Entering Adolescence series. Her work was also part of the group show at the Zeitz Museum of Contemporary Art Africa (MOCAA) in Cape Town, South Africa – the largest museum of contemporary African art in the world - as part of their critically acclaimed, “Back to the Future: Still Here Tomorrow to High Five You Yesterday” exhibition. Her work also formed part of the Contemporary Art Centre of New Orleans (CACNO) 2019 annual exhibition, Identity Measures, in New Orleans, Louisiana. In addition, REWA was one of the selected artists to participate in Nike’s Women’s World Cup 2019 Campaign, titled, “Don’t Change Your Dream. Change The World” and was featured as part of Unilever’s Vaseline pop-up during the 2019 Essence Festival in New Orleans, USA.

REWA’s work has since been shown at the National Museum of Nigeria and as part of the annual Art Dubai 2020 fair.
Since February 2021, REWA will be represented by OOA Gallery, Barcelona - Spain. First duo show "Emancipation" from 6 February till 14 March 2021.