Lebanese-French painter Marie Traboulsi Marinier lived in Lebanon during her teenage years. She studied painting at Haidar Hamawi’s studio. Later on, after moving to Paris, she majored in Interior Design at the Academy Charpentier (La Grande Chaumiere). In 1985, Traboulsi Marinier chose to dedicate her time solely to painting after having moved to Provence. In 1988, she was awarded the first prize of the city of the Salon de Provence. Her meeting with Grange Furniture in 2000 lead her to naturally merge interior design and painting, and to launch and create a new concept of decorative paintings with floral themes through her distribution company “Les Toiles de Marie”. From 2007 to 2011, Traboulsi Marinier created a line of textile designs for chairs and umbrellas upon the request of SAUVAGNAT GROUP LEISUR, and the ACCOR Hotel Group, keeping her paintings as a reference. 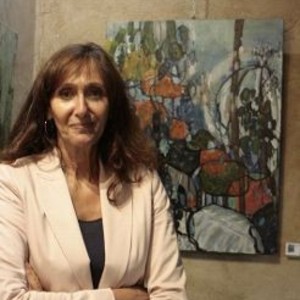