Hany Rashed was born in 1975 in Cairo, Egypt. A self-taught artist, he worked closely with renowned artist Mohamed Abla, who became his creative mentor. Considered to be one of Egypt’s most prominent and prolific contemporary visual artists, Rashed tackles and utilises pop culture in a way that breaks down barriers.

By experimenting with a range of techniques, such as collage, monotype, painting and sculpture, he continuously reinvents himself and his work. His predilection for the use of media images in his earlier work has pushed his audience to recognise the banality and damage caused by excessive exposure to Western media, highlighting a depersonalisation of the individual.

At the beginning of the January 2011 Revolution in Egypt, Rashed played a role in documenting recent Egyptian history through satirical artistic productions. About his Bulldozer series, he said: “The paintings of Bulldozer combine the use of manipulated plastic sheets together with the distortion of images from various sources. The bulldozer, which appears in some of the paintings, epitomises the deconstruction and repositioning affecting the people and the society, either in a cynical satire or playful reimagining. Bulldozer reflects on the human and social behavior and relationships.” 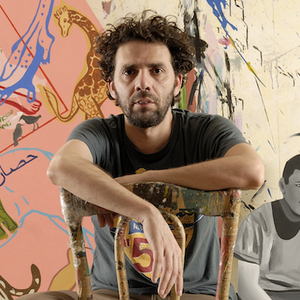