Using a crude expressive painterly language that incorporates autobiographical content, Adjani Okpu-Egbe unfolds a wide range of complex themes relating to Archaeology, Feminism, Patriachy, African History, Pan Africanism, Afrocentricity, the African diaspora and political activism reflective of and transcending the Southern Cameroons Ambazonian movement to highlight specificities within the realm of the global social justice movement. These are sometimes spiced with direct and indirect sense of humour that gives away an interest as a keen observer of people and a social commentator.

Often painting on found materials such as reclaimed doors and bubble wraps, Adjani's boundless imagination and experimental curiosity allow him to take these salvaged materials to heart and use them as convincing metaphors.

Okpu-Egbe’s most noteworthy exhibition includes; Regarding Africa: Contemporary Art and Afro-Futurism curated by Ruti Direktor at Tel Aviv Museum of Art, Israel in 2016 and The Underdog, a solo presentation at the 2014 edition of the 1-54 African Art Fair in Somerset House London. In 2012, Okpu-Egbe was amongst the artists commissioned nationwide by BBC to interpret the Queens Diamond Jubilee Pageant on the River Thames, making him the first African Artist to officially partake in such an event. 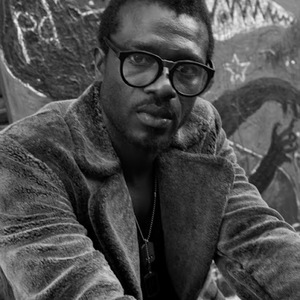