Mina Nasr examines the possibility of changes within Egyptian society under its current socio-political happenings. He is an observer of contemporary society, documenting and manifesting ideas of cohabitation by addressing issues about the culture, its community and the sort of problems it faces on a daily basis. His works comprise drawing, computer graphics and installations. Nasr demonstrates the human condition in the body structure and how it relates to the architecture of its surroundings. His works are characterized by unconventional forms, where he reshapes the human body according to the conditions it is offered in: whether whilst waiting in line to vote, or sitting in a metro waiting to get home. He observes the details of what each figure will be expressing during that single moment in time, and then re adapts it to a life-size format. Using black and white strokes in his paintings, he also defines the strengths of how each moment paradoxically confronts an alternative force: be it power and control confronted by freedom and liberty. Nasr adapts his freehand paintings onto the walls and experiences the space according to its intentions. 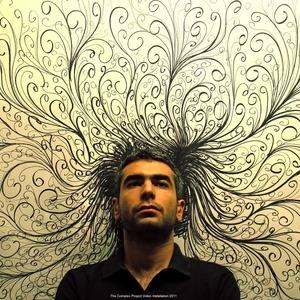