Makandal meanders through materials and themes, working automatically, intuiting objects in space, off-setting and pairing them with unexpected counterparts. The material ‘things’ range from detritus collected off the street to plant matter, to commodity objects, to industrial matter. She is concerned with chance, order and chaos, and how, if she sets up a designated space, the objects can begin to jostle up against each other in a sort of struggle for power. In contrast, the objects sometimes occupy one flat plane, rendered of equal status and value. Marks and colours create visual mind-scapes or an alternative landscape of a subjective inner process. The process displaces the familiar and foreign in memory and place.

This working methodology enacts with a greater concern for the meeting of artifice and ‘nature’; a third landscape textures the concrete geometric structures of urban space. Exploring an urban ecology, Makandal’s work mediates and militates against the effects of urbanism on the environment and human psyche during the Anthropocene. She is intrigued by how humanised activity on earth creates a binary between nature and society and how this dynamic is continually evolving. Her work is a fiction of space and place that illustrates the fluctuation between the environment we create and the natural realm.

The medium of drawing in its various forms, as virtual spaces, tactile installations and traditional methods of drawing in the abstract, is central to Makandal’s practice. This approach is further informed by the material residue of human activity in urban spaces, as a result of the continuous endeavour toward progress which ironically manifests entropy. In Life In The Entropics (2019), Makandal’s second solo show with the gallery, the artist ruminates over the substance of
what life is evolving into based upon the habitats we have created, and projects a fictitious environment of the Entropics – a space to place somewhere, in one’s mind, on the event horizon. 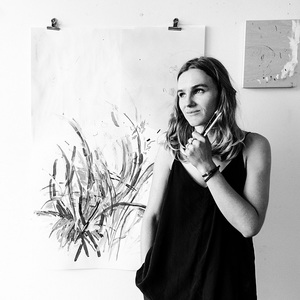