Founding member of the group Eltiqa Group for Contemporary Art, Mohammed Al Hawajri was born in 1976 in the Al Bureij refugee camp in Gaza. Under the supervision of Professor Marwan Qassab Bachi, he participated in the International Summer Academy at Dar Al Funoon from 1999 to 2001 in Amman, Jordan. Al Hawajri received a grant to go to Paris, France, at the Cité Internationale des Arts in 2008 and 2009. He has received many invitations to exhibit in Europe, the United States, South America and the Middle East. In his early works, Al Hawajri tried to separate politics from his art, however this all changed in 2008, after the Israeli attack on Gaza. His series Animal Farm dating from 2011 is inspired by his memories of his time spent with his grandmother who used to raise animals. Supported by the French Consulate General in Jerusalem, it offers a paradox of feelings of bliss and grief, suppression and freedom to further coexist, representing a revolutionary peace. In 2014, Al Hawajri created a series of artworks combining photography, video and performance, where he laid out a red carpet in numerous locations throughout Gaza to criticize the media’s attention on celebrities. He currently works and resides in Gaza. 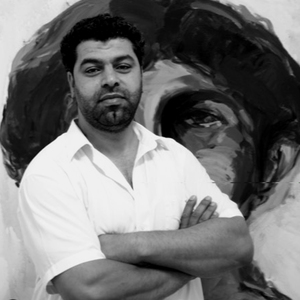