Lives in Germany
“In my childhood, a raft of vibrant colours took over my dreams” recalls artist Ala’ Hamameh, whose intense interest in colour has been a constant presence throughout his life.
Born in Masyaf, Hama, Ala’ Hamameh (1983) received his BA from the Faculty of Fine Arts, Damascus University in 2005. During this time, he researched the perception of colour in everyday life and its 10 million variations to the human eye. For Hamameh, certain bright colors felt overwhelming, and he later used them in his work to insinuate a certain violence from the war. In subject matter, his figures and objects are laden with symbolism, such as the empty suitcases and scattered belongings of all the people who fled their homes. Their faces appear absent of features as if they’ve been erased.
Hamameh’s work has been shown in solo and group exhibitions in Syria, France, the Netherlands, Italy, Lebanon, Turkey, Switzerland, Germany and notably the Venice Biennale. His film Memory of a Bag was shown at the opening of the new National Museum Malta and the Mercator Foundation in Berlin. 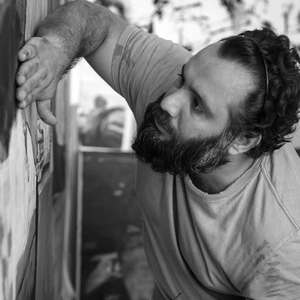 More From Ala' Hamameh