Michael Halak was born in 1975 in Fassuta village (Upper Galilee). After studying Fine Arts at Haifa University, Halak won a residence scholarship in 2005 to attend the Florence Academy of Art, Italy, in 2005. There, he would perfect his hyper-realist style. He graduated with a M.F.A at Haifa University in 2009.

Halak’s works moves along the frontier between hyper-realism and conceptualism. The illusion of reality represented on canvas may be seductively beautiful and perfect, but equally conveys feelings of disruption and disintegration. The perfectly constructed and executed works depicting landscapes, toys, and people are almost always slightly off: beautiful, almost real and yet they convey an awkward feeling, often impermanence, hybridity, entrapment, or categorization. Michael Halak plays with our perception to make us feel what he feels, to experience his reality: a life in transition, in a place that is not really his.

Halak has exhibited in many galleries in the Middle East, Europe, and the U.S.A. Halak has won several awards including the Ministry of Culture and Sports for contemporary artists (twice) and the Rappaport prize for a young painter and many more. His work can be found in several public and private collections in Palestine and aboard. He currently lives and works in Haifa, teaching painting and drawing in the Art Department at Haifa University.
Halak represents the second generation of artists, those born after 1967. In the footsteps of the Western tradition of realist and illusory painting that goes back hundreds of years, Halak’s earlier works focus on classical subjects such as portraits, landscapes and still lives, with a contemporary twist. The illusion of reality as he represents it on canvas may be perfect, yet it carries a disturbing charge related to states of disruption and disintegration.

His latest works are at the frontier between hyper-realism and conceptualism. The nine wooden panels, laser-cut to give the illusion of torn cardboard, become the symbols of historical and personal events. Halak addresses the immediate reality that surrounds him: the cardboards are part of his life, both figuratively and objectively speaking. Halak lives in a temporary place, in between. Due to personal changes, his life is in boxes. But the cardboard also symbolizes a more disturbing reality: the feeling of being “put in a box”, of being categorized. Deeply rooted in his identity is the sense of not belonging, of being permanently in transition, as conveyed by this large installation. The underlying question that shapes Michael Halak’s work concerns the connection between person and place. He relates this to themes of presence and absence, identification and dis-identification, witnessing and silencing, belonging and estrangement, memory and imposed oblivion. This tension, that shapes both his life and his work, is palpable. 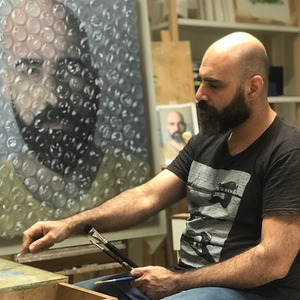