Born in 1957 in Baalbeck, Lebanon, Mazen El Rifaii is a painter, an interior architect and a visual artist. Head of his own firm of architecture, he manages the art direction of many projects. El Rifaii used to be a professor at the Lebanese University of Fine Arts. He was the head of the Art Deco department and gave many lectures during his time there. He now resides in Hamra, Lebanon. El Rifaii is the author of two books, “Baalbeck Black and White” published in 2007 and “Baalbeck” published in 2011, with his hometown being clearly his source of inspiration in his art. 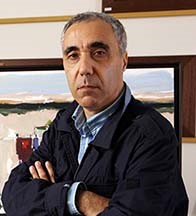