Very early on, Oumarou Baidi Oumarou opened his eyes to the world and not only looking at it and seeing it, he chose to observe it and sought to understand it. While very young, he was convinced of his vocation as an artist and suffered from no major opposition from his family, which is rare enough to be emphasized. He set his sights on painting and exhibited his first self-taught work in his hometown.

In 2013 - at just barely 17 years old - he won 3rd prize for visual arts at the Yawalta Maroua Festival. Coming to crown his first efforts, this distinction would be decisive for him. His secondary studies completed, Oumarou worked in a screen printing workshop, an experience which has strongly marked in his artistic production so far.

Multiplying contacts and exchanges, in 2014 he joined the fine arts club of the University of Maroua, and completed, in 2018, the short cycle of the Artistic Training Institute of Mbalmayo and participated in a short residency at the In and Off Art Center of the visual artist Hako HANSON, also from Cameroon.

Oumarou’s career took a new turn with exhibitions both in Cameroon and elsewhere in the world. In 2018, after leaving school, his works were presented in Mbalmayo and then in Yaoundé, "L’art spirituel de Yaoundé", the capital of Cameroon.

In 2019, his artistic career reached another dimension with his participation in "Africa now", at Galerie Claire CORCIA, in Paris; in DOUAL’ART, a fair of international reputation; while at the same time we saw his works at the National Museum of Yaoundé, or at Bolo art and culture space, in Douala.

His presence has also been noted at Also Known as Africa (AKAA), the contemporary African art fair which is becoming a must see in Paris. Represented by Claire CORCIA's well-established gallery in Paris, Oumarou has also joined the very recently established AFIKARIS Gallery launched by Florian AZZOPARDI.

Moustapha Baidi Oumarou asserts his "humanism" which gives its title to his exhibition in OOA Gallery. The artist scrutinizes the human being, man and woman, with a solicitous eye, with falsely simple expressionistic techniques, in order to convey all aspects, the good ones and the others.

He starts with allusion, clearly taking his place in the line of these “ornamentalist” artists who work very structured, neat and detailed canvases, with many small patterns, which one would be tempted to qualify as decorative at first sight, if one did not take the trouble to appreciate their depth and sometimes the violence of evocation. Two names come to mind, the Senegalese Omar BA and the Kenyan Evans MBUGUA.

Here we find the reminiscences of early training in screen printing and borrowing from the aesthetic codes of this technique. Moustapha represents faceless figures, hanging in the middle of nowhere, in gardens, in the middle of plants which are the only decoration. Only the postures and attitudes, sometimes the clothing, if not the rare accessories, allow us to have an idea of their purpose and intentions.

Moving humanity at the start of this chaotic century, a humanity caught between murderous identities and the steamroller of globalization. It is very difficult to give a nationality, or even simply an origin to his characters, they are content to illustrate the human condition without regard for the details which create useless segregation.

But under the apparent lightness of the treatment with flat areas of bright and acidulous colors and cuts of dark foliage, the artist wants to convey his message, to be the megaphone of the voiceless, make us realize the presence of the absent, all these characters that haunt our avenues and our memories and that we no longer see, that we no longer want to see.

This is by no means a miserable approach, just a hint, a call, a blink of an eye more serious than it seems. Young, dynamic, optimistic, uninhibited, Moustapha’s paintings resemble their author; they are full of qualities and are deserving of our connection. 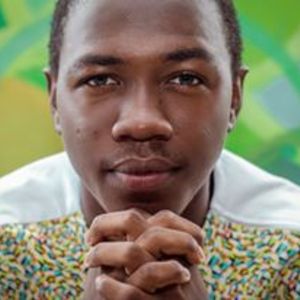